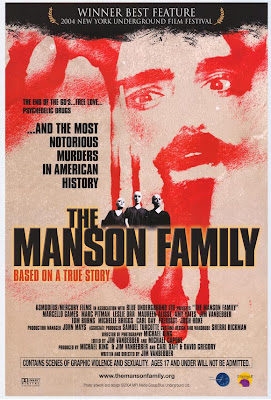 Jim Van Bebber is a god damn genius! Those out there who are familiar with the hard hitting violence of his films know exactly what I am talking about. I think that one general feeling for all Van Bebber fans is just wishing that the director had a bigger of body of work to his name. While I feel this way at times I am also very happy that the man doesn't just shit movies out because Deadbeat At Dawn and The Manson Family in particular are perfect for what they are.

This movie took the director close to 20 years to complete and all of the substance is there. Money of course being the main issue, it is amazing how much stamina and conviction a man like Jim Van Bebber has.

The film is perfect. It plays kind of like a documentary and it is obvious that these cats really did the homework on the subject. Many famous interviews are recreated and look as if we were watching the real family in 1970. Those familiar with the classic documentary Manson (1973) should know exactly what I mean. Doing a straight forward documentary would just be repetitive and Bebber opts to not just make another Manson-esque exploitation movie like I Drink Your Blood, so what he offers is a look at the family and not so much Charlie. The hippie sex, the drugs, the murder... Its all there. He also manages to blend the relevance of Manson and his family on society today and a new generation of dementos who want to carry on the old glory of antiestablishment and murder.

In one of the best moments Jim Van Bebber creates hell on earth in a scene where a dog is slaughtered by the hippie cult. They bath in the dogs blood and what follows next is a psychedelic trippy-dippy orgy with Charlie as Satan. The scene is amazing and looks like something that would have been shot in the late 60's or early 70's. Its really pretty mind blowing. The murder scenes are equally as memorable and the level of violence is really high on the gore-o-meter. By no means do these murder scenes seem to glorify the Manson Family murders. They do quite the opposite. They stand here to nauseate and horrify the audience and I feel that the mission was well accomplished. The stabbing scenes are relentless. We see the knives plunge down into the bodies of the victims over and over again.

The Manson Family is really not for everyone. Those who enjoy watching movies on Manson or really dig gory horror movies are probably the main audience here. For those people, myself included Jim Van Bebber left us something witchy. In other words it is an instant classic! 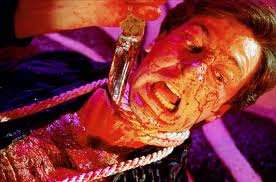