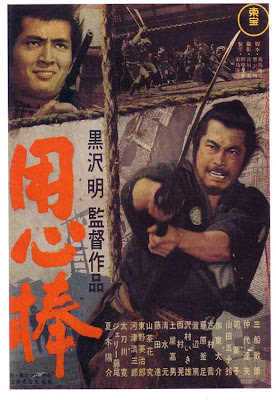 Akira Kurosawa (Throne Of Blood, Seven Samurai) writes and directs this classic Samurai masterpiece. Do you like Spaghettie Westerns? How about A Fist Full Of Dollars or Django? All of which were heavily influenced by Yojimbo.

The Spag Western genre is just the start of films that would pay homage, ripoff or just plain remake this visual tale of the lone Samurai. Lucio Fulci would mimic the opening scene in the beginning of his 1982 Gialo The New York Ripper, which shows a dog running towards the camera with a severed human hand in its mouth and much more recently Takashi Miike (Audition, Fudoh) would do his own version of Yojimbo with Sukiyaki Western Django. So many film makers, mainstream and cult icons alike all owe a debt to the genius Akira Kurosawa. 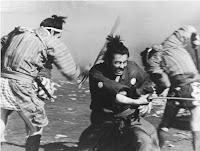 The film follows a Samurai who I like to refer to as "the man with no name" who enters a desperate town which has been split in half with two big gangs controlling each side. The few towns folk who are not in the gangs have it worse then anybody. This would be the merchants, the brewers, the cooks etc. In a town with no law and nobody to protect them against the gangs these people are pretty much doomed. Now along comes this man with no name, carrying a sword. Will he save the people from this town which is about to self destruct or will he just help speed up the process of elimination. The answer is a little bit of both. The truth is that this lone Samurai only has his best interest in mind. He is an assassin. He gets payed to kill mother fuckers and he doesn't care who he kills. He will join the side with the most money and kill all of their rivals.

Our assassin proves himself by cutting down some loud-mouth punks in the streets. Arms go-a-flying and dudes are sliced to ribbons. Now everybody in the town wants this man on their side. He plays the rival gangs against each other like pawns in a game of chess. It seems like this town is coming closer to its end then ever and eventually something happens to make our Samurai decide to not work for either side. This means it will be hundreds against one. Pretty bad-ass huh? To make things even more interesting one of the gang members acquires a gun and in these times of fists and swords a gun is a pretty big deal. It may not be a Django style Gatling gun but it is still a gun.

To top it all of this bloody tale of violence has a dark, very dark sense of comedy that runs through out. You can't help but laugh at some of the characters and situations that come up. It is the humor and the violence that make Yojimbo such a memorable experience but there is also a brilliant simplicity to it all. A simplicity that I can only relate best to Alfred Hitchcock and movies like The Rear Window. There is a simple repetitiveness that holds the films pace together and while many directors and writers have undoubtedly been influenced by Akiria Kurosawa I am pretty sure it is safe to say that Kurosawa was influenced by Hitchcock. "You're a good guy, aren't you?"