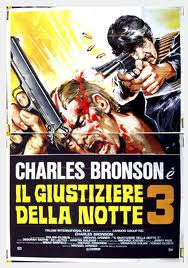 If you look at the Death Wish series and then look at the Rambo movies, you might notice an interesting pattern. The original Death Wish put Charles Bronson forever in our hearts as the revenge guy. The oh so necessary follow up Death Wish 2 comes along in 1982 which is the same year that the first Rambo movie came out. Now I am sure that First Blood just blew Death Wish 2 away in the box office and Charlie Bronson did not relive his day in the sun. Jump forward to 1985 and Death Wish 3 is being wrapped up and ready to hit screens. Guess what else is getting ready to hit theaters... If you guessed Rambo 2, you would have guessed right. Now my guess is that the Death Wish boys were not about to give up the fight so easily and lose to Rambo again, so instead of doing another 70's style rape/revenge flick they chose to do an all out shoot-em-up action flick. 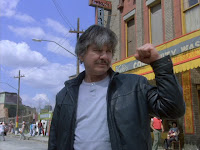 Well that is pretty much what we get here and the vengeful Paul Kersey is back in New York to kill the scum that pollutes the city streets. This time Charles (Paul Kersey) Bronson is working for the pigs. The East New York police are corrupt and not much better then the punks that terrorize the streets but Kersey doesn't have much choice. He will either rot in jail for a murder he did not commit or kill the bastards who actually did it. For those who are familiar with the series, the street-scum that Kersey goes to war with in part 2 are pretty outlandish and unforgettable. Well the new gang of punks are more ridiculous then ever and have grown in numbers. 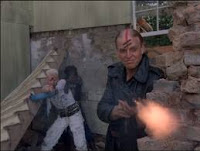 These comic bookish bad guys all come complete with silly face paint and are completely decked out from head to toe in leather. These leather clad bad boys are lead by a Irish goon named Fraker who comes complete with a deep transvestite type voice, an inverted Mohawk and fully automatic weapons. Well it looks like the body count is going to be pretty fucking high in this one huh? Paul Kersey kills everything that jingles when it moves including a stereotypical punksploitation cackling bad guy named "The Giggler". Once the Giggler's brains are splattered across the city side walks Fraker and his gang call in other local gangs to help take out the one man army that is Charles Bronson. Naturally Bronson is going to need a little help of his own so he brings out the heavy artillery which comes in the form of a rocket launcher and a Gatling gun.

To say the least Death Wish 3 is an over exaggerated and over the top version of the classic 70's revenge flick. It is ridiculously mind numbing and you are bound to come out of it short of a few brain cells. Then there is the really cheesy score which Jimmy Page can take the credit for. Despite the huge body count and the giant explosions Death Wish 3 is really a lot softer then the first two films. That nasty 70's vibe is gone and replaced with big shoot outs and typical 80's action type stuff. There is even a rape scene that manages to come off extremely tame compared to the first two films.

Still if you can look past this, Death Wish 3 can be a good time waster. It is fun, it is moronic and it is of course Charles Bronson. This one goes perfect with some beers and some friends who are equally retarded and can enjoy this form of mayhem for mental midgets. Perhaps the funniest thing about Death Wish 3 is that is supposed to take place in East New York but is clearly the suburbs. We also have a ridiculous scene where Kersey shoves a fat skinheads head between prison bars, leaving him stuck and fucked or high and dry if you are more of the sensitive, politically correct type. Is that even possible? This one will raise many of dumb questions.

Check it out for Bronson gun-fu and dead punkers!