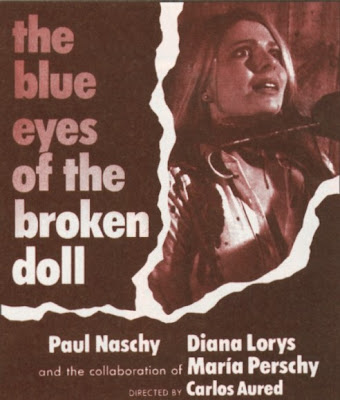 This Spanish Giallo is also widely known as The House Of Psychotic Women in America and even aired on television as House Of Doom. To think of this movie on t.v. is completely ridiculous. Everything that is cool about it must have been removed. I personally prefer the Blue Eyes Of The Broken Doll title and for multiple reason. First being that it sounds like a genuine Italian made Giallo. Secondly, blue eyes and dolls are both part of the plot.

Blue Eyes Of The Broken Doll was directed by Carlos Aured who I remember best as the director of Horror Rises From The Tomb but it was co written by the great barrel-chest Paul Naschy and I thank the horror-gods for that. Paul Naschy stars in this murder mystery as Gilles. Gilles is a gardener and grounds keeper at a giant mansion. Living in the mansion aside from Naschy is a bunch of hot women. Its a house of hot psychotic women if you will. Or at least that's what they want us to think. Well some of these babes do seem to be a bit off and it is Naschy who seems to be the only completely sane person in the whole damn house. That is at least till the later part of the film.

Well it becomes quite obvious that Naschy helped write this thing because his character does exactly what we expect him to do. He basically walks around and acts tough all the time and takes his shirt off constantly to show us and the females around him his giant barrel-chest that we all know and love him for. Of course the women can't resist him. After all, they never can. They take turns screwing him and it all is just one big excuse for the girls to get naked in front of the camera and Naschy too of course. In fact the movie starts off pretty slow going and the only thing that keeps us from falling asleep is the bare breasted bimbos that are always on screen. If it wasn't for the nudity Blue Eyes Of The Broken Doll would probably be a real drooler. 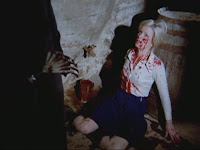 Eventually the movie shifts gears and becomes less of a Sexploitation flick and more of what we would recognize as a Giallo. We do get a black gloved killer roaming about and knocking off the women one by one in true Slasher fashion. The killer uses multiple weapons but in one of the most memorable scenes the weapon of choice is a simple gardening tool. The small little claw that is used for raking weeds up from the garden but in this scene it is used to claw out a pretty blond haired woman's eyes. In fact there is quite a bit of this eye-gore stuff and we often see the killer roaming around with blue eyes in the palm of the black gloves. Priceless! We are also treated to some maggots pouring out of a corpses eye sockets which is always a nice added bonus in the gross department.

Wait a minute, isn't Naschy a gardener in this movie? Does this mean he is the killer? Maybe... Blue Eyes Of The Broken Doll has so many red herrings. They almost try to pass every character in the movie off as the killer at some point and yes we do get a fair share of twists and turns and chances are you will never guess who the killer is before it is revealed even though there are some hints dropped here and there.

Some of the other scenes that come to mind that are worthy of talking about is a scene where Naschy gets into a knife fight and ultimately is stabbed in the guts. A babe seduces an old fucker while wearing her best cheerleader outfit. We get some cool looking squib effects in a gory 70's shoot-em-up scene and the ending is sure to make you chuckle.

Nowhere near my top favorite Giallo flicks or even Naschy movies for that matter but still worth a watch for plenty of naked female & Naschy chests alike.