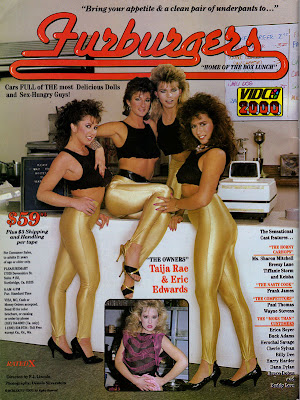 Aside from being directed by the great Weasel, Fred Lincoln, Furburgers stars another horror/porn cult icon. Sharon Mitchell (Maniac (1980), Water Power) shows off her Furburger in this one along with Taija Rae (Candy Stripers part 2). As far as the men go we got Eric Edwards as Mr. Fur, Paul Thomas as a dork with a speech impediment who gets laid way to much and Herschell Savage (Kissin Cousins) shows up as the minute man in a very quick sex scene. You would think with over 800 titles to his name he would hold out a bit longer then 5 minutes but this is not the case in Furburgers. Herschell shoots his Savage load within minutes flat. Good going, ya meat head!

Furburgers is actually a really fun movie. It was shot in the late 80's so it is pretty damn goofy but the bad acting, ridiculous plot and dumb-ass characters make this fuck-flick a funny watch. I found myself laughing through most of the movie. If you can get past the gigantic, teased out 80's hair, you might even find yourself going back to watch this movie again and if you're just a pervert the sex scenes are half way decent as well.

Eric Edwards plays Mr. Fur, the owner of a shitty restaurant that specializes in Mamma's home cooking. All of Mrs. Fur's recipes can be found on the menu and most people that come in will never come back for a second go. In the same parking lot is "The Burger Ramma" which is run by Paul Thomas. The Burger Ramma is a typical American fast food joint but they have one unique thing going for them and this is a bunch of hot scantily clad waitresses. The rules of the house is no bras and that is about it. The girls at The Burger Ramma are getting a bit tired of slobbing Paul Thomas knob every five seconds and being groped by his balding daddy so they decide to go next door and work for Mr. Fur. The girls convince Mr. Fur to change the name of the restaurant to Furburgers and they come up with the stupid slogan of "Home Of The Box Lunch" and the place becomes an instant hit and puts The Burger Ramma under. Oh and it isn't the food at Furburgers that attracts so much business, it is the dessert. The desert is of course the Furburger of the waitress that serves you, so basically they turn Mr. Furs restaurant into a whore house. Shit, I hope he is paying these girls well.

As dumb as the plot is Furburgers is a pretty cool movie. It comes complete with lesbianism, giant 80's hair, plenty of funny moments and a great soundtrack. The theme song for Furburgers has to be heard to be believed. "Furburgers, We know you can't eat just one"