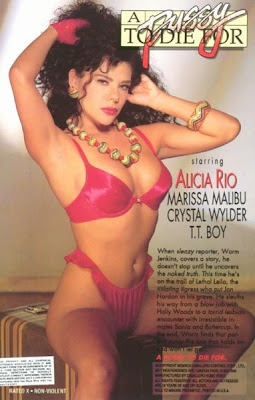 Imdb.com claims it to have "shades of Citizen Kane" within. It is an atrocity to even mention Citizen Kane while referring to this shit-fest. The story, if you can call it that, follows some private dick who is trying to get to the bottom of a mysterious death involving a millionaire named Mr. Hardon. Oh wow they are so fucking witty, I think I'm gonna shit my pants. Anyway the private dick screws a few girls to gather information on this dip-shit named Hardon. The story sucks, the sex scenes suck, the acting sucks and even the film stock... oops, I mean video sucks. Don't be a sucker like me. If some fat fucker walks into your place of employment and hands you this movie just throw it right in the garbage because that's where it belongs.
Posted by Paul Awful at 11:35 PM