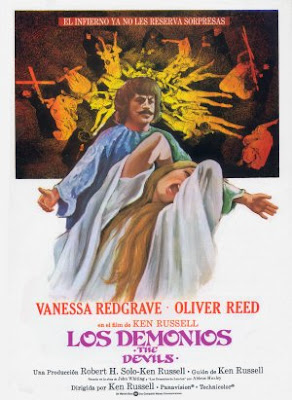 This early 70's art film is a controversial look at Christianity and the inquisition in the middle ages. It is quite a twisted tale and it sticks with you for a while after viewing.

I really do have a soft spot in my heart for any movie that makes religion look scary. Films like Lucio Fulci's Beatrice Cenci and Bad Boy Bubby are amongst my favorites and now this crazy British flick. Anything you have read about The Devils will not prepare you for the insane vision that Ken Russell pans out across the screen for us. It is unbelievably maddening, relentless, disturbing and I guess offensive to religious folk but then again mentally challenged religious freaks probably have no place watching art films in the first place. They are probably better off reading the same book they always read once again.

For me The Devils was sort of like a cross between Witch Finder General, Beatrice Cenci and Holy Mountain with elements of a Nunsploitation flick thrown in. Of course The Devils ranks above the average exploitation movie in just about every department but the depraved and deprived nun thing is still there.

One of the things that made The Devils such a great experience for me was the fact that there really was no good guy in the whole movie. This is at least by the bibles standards. Sure our main character is better then others in some ways but what it all comes down to is that everybody is a sinner and most of the maniacs in this movie use religion as a shield for their own evil doings. This goes from womanizing to torture, rape and even murder.

In the most memorable and controversial scene a whole convent of nuns are tortured and brainwashed (as if they could be brainwashed any more then they already are) by the inquisition. The bastards who hide behind their robes and cloaks of imaginary good convince the nuns that they are possessed. The nuns go bats-crazy and indulge in a giant orgy. They take a statue of Christ down from his cross and let him in on the fun. They ride the nails in his hands, his torso and even his face (Crown of thorns and all). If the scene in The Exorcist bothered you, where little Reagan sticks a crucifix in her cunt, well then I recommend skipping this one at all costs. Next the women of god are forced to help the inquisitors wrongfully convict a priest who they want out of their way. The priest is brutally tortured into confessing his own blasphemy which is quite ironic and for me very tongue in cheek. We see the priest being beaten to a bloody pulp with hammers and yes it is all in the name of god.

I think it is safe to say that if there is a hell and the inquisition was not it, that everybody who had anything to do with The Devils would be going there. Or they could always just say ten hail Mary's and call it a day.