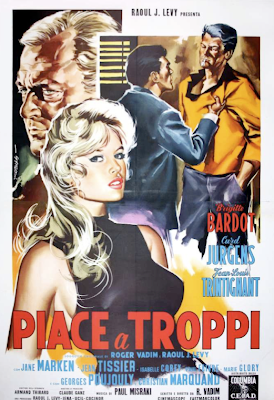 Writer/director Roger Vadim knows how to make a sexy movie. After all he would go on to do the Jane Fonda sexy sci-fi epic Barbarella and come back to Brigitte Bardot again and again until he made the French sex kitten his wife. 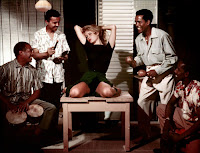 And God Created Woman is Roger Vadim's first feature film and it is also the movie that made Brigitte Bardot the sex symbol that she is. It is a theme that most Bardot films would follow. Every guy wants the girl but the girl only wants one guy and can not have him but there is much more to this cult classic.

Brigitte plays Juliete a beautiful young orphan who has no place in society. She has a reputation for being a "whore" but this is mainly due to her attitude and appearance. Juliete is more of a tease then anything. She enjoys sun bathing in the nude and walking around with her blouse unbuttoned and the male audience enjoys it as well. Most of the men in town think of her to be nothing more then a sex object and of course there are one or two who claim they love her but it is a heartless scum-bag named Antoine that Juliete is head over heels for. As she explains "I don't love him. I hate him! It is a disease... I can't be happy with him around".

And God Created Woman almost has a feminist touch to it. Juliete is thought to be a slut but it is her lack of up bringing, morals, judgement and even class that makes her come off this way. She is a bit of a bitch. She will break a mans weak little heart in two and not even look back. She sits with her legs spread and her panties will be exposed to the world. Men drool and women are jealous. This is pretty racy stuff for a 50's film and it is no wonder that Brigitte Bardot has become such an iconic symbol of sex. Back to the story, things get really bad for Juliete when she is threatened to be sent back to the orphanage until she is 21. Antoine's brother asks Juliete to marry him and she does it to save her own ass from the prison they call the orphanage. From here on And God Created Woman becomes a pretty depressing drama. Juliete is miserable and the men around her will destroy one another for a piece of the blond bomb shell. It becomes evident that this film will end in tragedy.

And God Created Woman offers up plenty of Brigitte Bardot tease-o-ramma stuff. We have scenes where she lay totally nude. The camera angles show off Bardot's stuff without really letting us see to much in strip tease scenes that are almost unbareable for a man to watch without gasping. Her skirt always seems to be revealing her underwear which gives the film a voyeuristic sense to it and of course we get the infamous dance sequence where Bardot rips the buttons on her skirt off and does the cha cha cha half exposed to the world.

Fans of Raquel Welch's One Million Years B.C. should check Bardot out in the beach scene where she is nearly drowned and rescued by a man. Her soaking wet body is exposed through her see through dress and it is all followed by a sex scene.

I normally am not the type to watch romance dramas. Sexploitation and Splatter Films are more my speed but I have this life long obsession with Briggite Bardot. She makes it possible for me to watch any movie and in the end I always enjoy them. Brigitte Bardot has a way of making a guy feel like a school boy living in a fantasy land. It is easy to fall in love with her in every role she plays, even the really nasty ones like Contempt. And God Created Woman is no exception to the rule. As a man you can almost place yourself in the shoes of the idiotic males in the movie. Would I kill my brother for a chance with Brigitte Bardot? Maybe so...

And God Created Woman is one of the best films from the queen of sex appeal. A must see for anyone who has ever drooled over Miss Bardot.

Email ThisBlogThis!Share to TwitterShare to FacebookShare to Pinterest
Labels: And God Created Woman, And Woman Was Created, Brigitte Bardot