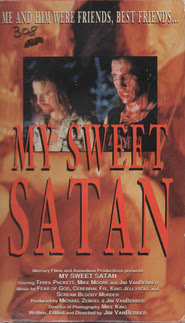 In 1984 a Satan worshiping high school kid by the name of Ricky Kasso killed a friend in the suburbs of Long Island. Ricky Kasso also went by the name of The Acid King, since LSD was his drug of choice and used the drug frequently while hanging with his degenerate friends, listening to his AC/DC records or praying to Satan. There were multiple books and movies made about young Ricky Kasso because he stirred up some controversy at the time. Since the teenage murderer hung himself in his cell upon his arrest, it was necessary for someone else to tell his story for him. 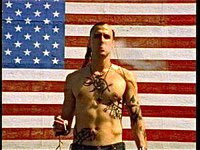 My Sweet Satan is one of those Ricky stories. Written, directed and staring Jim Van Bebber the man who brought us the cult classic gore-fest Deadbeat At Dawn and later The Manson Family. This telling of Ricky Kasso and his Satanic escapades is strung together in a 20 minute or so short film.

Jim Van Bebber plays Ricky, who has had his acid lifted from his pockets at a shitty house party. The lame-brain who took his drugs will have to pay. Sure we all know Ricky is going to kill him but it was up to Mr. Bebber to deliver such a brutal murder sequence. Ricky invites his victim eat some acid in the woods and pray to Satan. The dumb-fuck falls into the trap. He does get to take some LSD but I'm sure he didn't know that he would be stripped nude and have his clothes thrown into the fire as an offering to the devil. Ricky makes his thieving pal pray to Satan. "Say you love Satan. Say it!" and then stabs the shit out of the kid. Next he stomps the high school hellcats brains out and it is one hell of a gory scene. Before we know it Ricky is a-swinging in his jail cell.

Since this thing was shot in 1994 and no where near the original murder. Jim Van Bebber blends in some more of his own personal interest and makes the character of Ricky out to be an Industrial Rivet Head type of character. Of course the real Ricky was a small piss-ant AC/DC kid and most Industrial types are not much tougher but Van Bebber is one tough looking mofo. Even if he does have bad tribal tattoos and a long Gothic kid hair cut. I would not fuck with this dude and I don't wanna end up nude and praying to Satan.

This movie also offers up some footage of piercings. Similar to something you would see in a Richard Kern flick. This one is always a fun quick time passer. The perfect gory kind of thing to entertain friends with short attention spans. 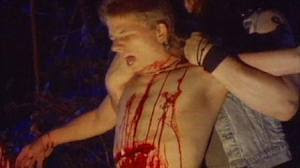