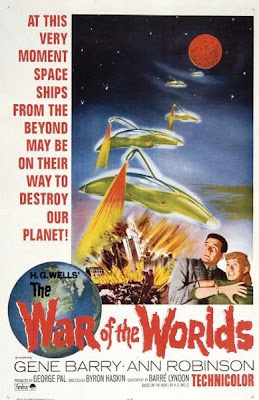 The original film adaption of H.G. Wells War Of The Worlds is an excellent movie. The special effects were ground breaking for its time and the film did win some awards in that department. The story is also interesting and it holds the viewers attention all the way through. At the same time War Of The Worlds has a bit of camp value to it which makes the film easy to go back and look at it again and again.

War Of The Worlds opens up with a narration on World War I and World War II and prepares us for The War Of The Worlds which is supposed to instill fear into its audience that there will eventually be an invasion from other worlds. In this case the martians will invade us from planet Mars and destroy Earth from within. The martians will be armed with heavy artillery that man of Earth can not compete with or even understand. The martians superior minds and machinery is far beyond that of a Earthling and it all makes for one hell of a chaotic ride. There is anarchy in the streets and brother turns against brother in a fight for survival as mankind becomes another endangered species. However the martians destroy more then human beings. They kill birds, cattle and wild life alike. Earth will become the martians new home. You can call it a migration if you like. 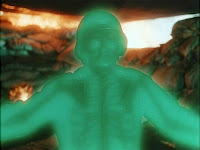 As great as the original War Of The Worlds is, the film is not without flaw. It comes complete with one of the biggest cop-out endings I have ever seen but I will get back to that in a bit. War Of The Worlds also has this religious subtext to it which comes off as a giant contradiction for me. When the aliens first land a priest believes that they "must be closer to the creator" since they are more intelligent. That is a joke in its self but doesn't this man of god realize that the bible is limited to the people of earth. Nowhere in the so called good book do they mention little green me from Mars. Nope, for that we need to look back to the exploitation gods, to men like Roger Corman (Invasion Of The Saucer Men) and so forth. Well if it makes you feel any better when the dip-shit priest approaches the U.F.O. with book in hand and ranting some ancient scripture he is burnt to ash from the high powered laser weapons that the aliens use. Next we get an all out battle. The United States army against the beings from Mars. Our tanks, planes, bombs and ground troops are all useless against the machines from the other world and victory seems hopeless. The government even goes as far as to drop the atomic bomb on our own soil to try to win the battle but with no prevail.

From here on it is total chaos across America. Cities are destroyed very realistically and the survivors are running wild in the burning streets. It is shot perfectly and it really does look to be hell on Earth. This is my favorite part of this movie. Since American soil has never been invaded by another country it is amazing to see what could happen to our cities. Buildings falling to the ground, people fighting in the ruble over things like food, water or even vehicles. It is quite the spectacle but then the film completely cops out. We go from being in the most hopeless and desperate situation to returning to safety. It is clear that mankind is finished. There are a few hanging on by a thread but they will be removed at any moment but at the last moment the Martians lose the battle. If you want to know how they lose the war you will have to see the movie for yourself but I will say it was a cheap way out and it all relates back to that religious stuff I was talking about. Still, War Of The Worlds is a brilliant piece of sci-fi cinema from the 50's. The perfect film for monster and alien obssessed maniacs. 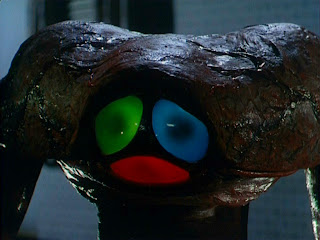 Email ThisBlogThis!Share to TwitterShare to FacebookShare to Pinterest
Labels: Monster Movies, War Of The Worlds