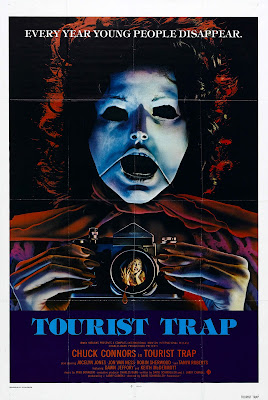 This has to be one of the weirdest slasher films ever made. Not weird in an artsy-fartsy kinda way but just weird in general.

A group of four kids on a road trip are stranded in the middle of bum-fuck nowhere. A seemingly nice old man invites them back to his now out of business wax museum where they are stalked by a maniac and haunted by the wax dummies which seem to come to life.

Now when I said this is a weird slasher, the weird part is obviously not the four kids being stalked and killed by a nutso maniac in crazy masks. Its weird that The Tourist Trap blends super natural horror with prototype serial slash-em-up scenes. It all makes more sense as the film runs on and we learn that the dummies are not actually alive but they are being moved by our killer who has a sort of Carrie White telekinetic power going on.

To make things even cooler The Tourist Trap has a sort of Texas Chainsaw Massacre vibe to it. For starters some of the masks are very reminiscent of Leather Face and the film also deals with a demented and psychotic family in the middle of nowhere. The director who was actually born and raised in Texas was probably influenced by the Tobe Hooper classic of 74 but I can not say for sure. The director would go on to do movies like The Crawl Space with Klaus Kinski and later the shot on video embarrassment Puppet Master. Well at least the guy started off strong.

For me personally I think this film works best for younger genre fans. When I was a little kid this movie probably would have scared the shit out of. There are some very creepy scenes where the mannequins come to life and sort of scream at the cameras. When you are an adult it is all a bit funny, especially if you are like me and seen way to many horror films. Still The Tourist Trap is good campy fun from the late 70's. It comes complete with an axe that is swung into a mans neck, multiple shotgun blasts to the torso, a pole is shoved through a mans back, a woman is suffocated, drownings, strangulation's, stabbings and plenty of evil doll action.

Show this to your 12 year old cousin and it will probably scare the shit out of them.