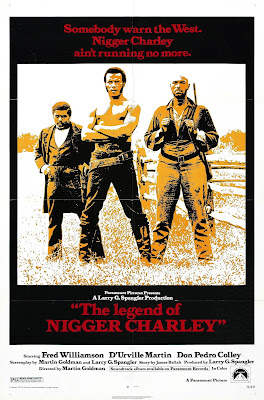 Like the saying goes "They just don't make them like they used to". Then you might get some asshole youngster who wants to argue the fact because they like the way c.g.i. looked on the last fucking Transformers movie or something. Well, all I have to say to them is nobody making dangerous movies anymore but they would never even dare an attempt at an exploitation title like The Legend Of Nigger Charley.

Perhaps the foreign poster is less offensive and safer to put on my blog. Well its a damn shame because The Legend Of Nigger Charley is a great piece of exploitative history. This one brings the Blaxploitation genre into the western territory. Of course it would spawn a sequel called The Soul Of Nigger Charlie but would also be a big influence for future film Boss Nigger which also stars Fred (The Hammer) Williamson and that bad D'Urville Martin that we all know and love as Willie Green from Dolemite.

In this one Fred Williamson plays Nigger Charley, a black slave in the old west. Charley's master is on his death bed and as a last act of kindness he sets Charley free but things can't be that easy for our gun-slinging soul brother. The man who is taking over the estate wants Charley for a whipping boy but he bites off more then he can handle when he tries to stop Charley. Charley beats that honky to death and it wont be long before the law is after him. Not even a freed slave has the right to kill a white man. Not in this movie anyway.

So Charley takes bad D'Urville Martin and another friend named Joshua with him and they shoot their way across the desert. When they hit an exceptionally racist town, they decide to "Warn the west. Nigger Charley ain't runnin no more". They kill anybody who tries to keep them from their freedom and its not long before the three outlaws are growing in numbers. African Americans are eager to join up with the bad-ass crew and fight for the love of brotha. Of course Mr. Williamson is the hero and of course he gets all the bitches, even half white ones. We get some really cheesy shoot-em-up scenes and a whole lot of racial slurs thrown into the mix and what it all comes down to is that ain't nobody ever gonna own this nigga again.

Personally preferring this earlier film over Boss Nigger, I would recommend The Legend Of Nigger Charlie to anyone who likes Blaxploitation movies and Fred Williamson in particular. It comes complete with a cool theme song and a crazy black old-timer in a big hat who tells some pretty crazy stories. We also have a bad guy who calls himself The Preacher and quotes from the bible before he kills mother fuckers. Sound familiar? Cough... Pulp Fiction. 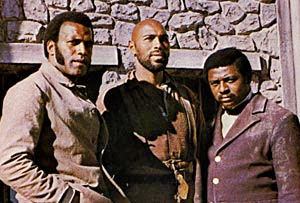