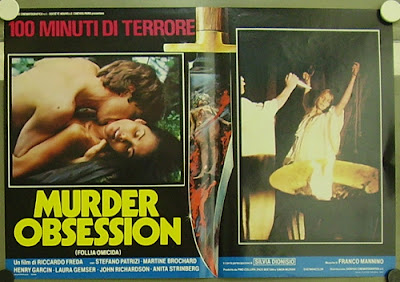 The story reminded me a lot of movies like Three On A Meathook with the oh so familiar tale of a boy who has been brainwashed into thinking he is responsible for a horrible murder. Of course when the murders pick up again they want the viewer to believe that the boy is up to his old tricks again but come on, we were not about to fall for that one again, were we?

The first half of the movie is slow going but very strange things happening at the same time with what seems like dream sequence after dream sequence. We have skulls in trees that cry blood, zombies and giant spiders that chase half naked women around a castle. This is not exactly my cup of tea, especially if I was told I am in for a Giallo flick. Well this stuff goes on for quite some time and Murder Obsession never seems like a typical Italian slasher/mystery until the later part of the film and when it all shifts gears into more familiar Gialo territory it is all way to elaborate and confusing for the audience to really even care.

On a more positive note we do get a fair share of bare breasted ladies. Amongst the nudie-cuties is (Black Emanuele) Laura Gemser. As expected Laura Gemser offers up her naked body and she also gets killed off by the black gloved killer. Murder Obsession also comes complete with a bit of incest between a horny mother and her son but for me the main highlight was a completely out of place murder which shows a man having an axe embedded into his achy-breaky skull. Brain matter goes a-flying and it all happens so fast it just seems like a subliminal message thrown into the film to get the monster-kids to go on a blood crazed, axe murdering rampage. Who the hell did I just see get murdered and why does it look like he is wearing a Michael Myers, Halloween mask? I'm confused again...

There isn't much here to recommend, unless of course you like Italian murder mystery's that make no sense. I know there are people out there who praise this movie but I would rather stick with a Gialo that I can follow. Oh and leave the Michael Myers masks to the Americans. Thanks. 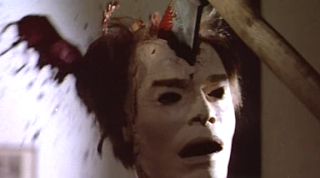