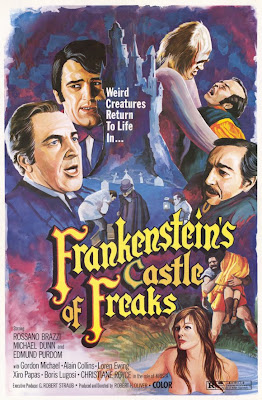 This is one of those movies that people love to bad mouth that I absolutely love. What we have here is an Italian Euro-Trash Frankenstein flick. Well its kind of a Frankenstein flick. It does have a mad scientist named Count Frankenstein. Wait a minute isn't Dracula supposed to be a Count and Frankenstein a doctor? This is just a sample of the confusion and madness that Frankenstein's Castle Of Freaks has to offer.

Anyway, Frankenstein is up to his old tricks again of bringing the dead back to life. He has a big oaf of a man with white bandages wrapped around his head with a big blotch of blood on it strapped to the table in his lab. There is also a caveman running around and terrorizing the village. Mean while Frankenstein's dwarf assistant is fondling the dead bodies when nobody is looking and all of the women in the movie use any excuse they can to take their clothing off in front of the cameras.

Yep this one is pretty trashy and that's what makes it so damn good. All you cats out there that like to trash-talk this movie should really know better then to buy something with a title like Frankenstein's Castle Of Freaks. I think those people might be more brain-dead then Count Frankensteins mongoloid monster. That guy knows a good exploitation title when he sees one and he enjoys the naked ladies as much as I do. 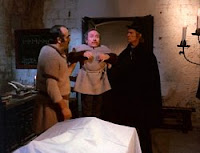 Oh and did I mention that this movie has a sinister necrophiliac dwarf running around? Of course I did. The necrophile dwarf is played by Michael Dunn and he might be recognized by lovers of bad cinema from The Werewolf Of Washington. Well anyway, this little guy touches one to many corpses and Count Frankenstein throws him out of his castle of freaks. The little corpse fucker heads for the caves and joins forces with the caveman who has been causing all the havoc. The dwarf uses the strong caveman to help him rape helpless women. The unproportioned duo also work together to kill Count Frankenstein but things get really crazy when the bandaged monster breaks loose. Oh it is quite the spectacle to see. Two giant retards battling to the death with a pervy dwarf caught in the middle of it all. Mean while the villagers form a typical angry Frankenstein type mob with pitchforks and burning torches.

We also get all these weird scenes of naked babes bathing in some muddy hole in the ground and I think somewhere in that hole is a fog machine because the place is always very misty. We also get a completely out of place S&M scene in a barn. Women are slapped around, midgets are carried around, mongoloids and giants are thrown around and it is all just one hell of a good trashy time. 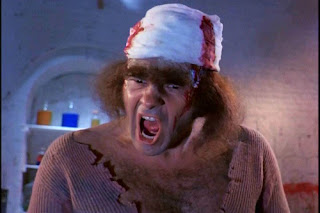