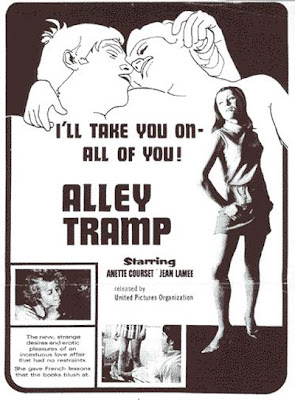 The great Herschell Gordon Lewis directs this 1968 Sexploitation romp under the name of Armand Parys but we know a Herschell movie when we see one, don't we?

H.G. Lewis fans will recognize a lot of the cast members from other classic films. Steve White who I remember best as the singer in The Blast Off Girls shows up here as Philip and our small breasted, blond hair, leading girl Julia Ames can also be seen in Blast Off Girls as well as Just For The Hell Of It.

On the other hand people who are only used to Lewis's gore films (Blood Feast, Color Me Blood Red) might find it hard to believe that this slow moving sexploitation flick could come from the same man. All I have to say to them is watch The Alley Tramp back to back with The Gore Gore Girls and compare acting, cutting and camera work. You will see what I mean.

Marie is a sweet sixteen year old girl who is beginning to think about sex. In fact that is all she really ever thinks about. Then one day her cousin Philip stops by the house to study. Marie seduces Philip by wearing a short dress and no bra and giving him some peeks up her skirt. Yes her skirt is short even by today's standards but her giant 60's underwear is big enough for the couple to use as a blanket. Anyway, once the cousins indulge in a little bit of incest the sexual obsession becomes even stronger for Marie. What we have here is a classic case of a 16 year old nymphomaniac. Her nymphomania gets so bad that she even stops going to school so she can have more time to screw cousin Phil. Mean while mom and dad are neglecting the problem and are to busy cheating on each other. Pop is sleeping with his subhumanoid secretary and mom also really knows how to pick em. She finds herself a total creep in a local dive-bar. When Marie over hears mother dearest and her new boyfriend doing the dirty she black mails moms sleazy new boyfriend into being her own personal sex toy.

Its all just your pretty standard run of the mill sexploitation stuff. With some hot beaver shots and some not so hot nudie antics. Mom is probably the best looking female in the movie and she has some pretty wild hair to boot but the thing that makes The Alley Tramp so fun is the really bad acting and the obvious reading of lines. The actors are clearly looking down to read the dialogue and the best moment is a long screaming rant from our teenager in heat. "I'm no ones little girl. I'm a woman! And I'll never be told what to do! Not ever again". There are also some ridiculous scenes where Marie flaunts her body in front of mommy and it all comes together with a really horrible and ridiculous message after a nice abortion. It was of course all mommy and daddy's fault and there is really nothing wrong with incest. Thank you Herschell Gordon Lewis for you are a god amongst men in the world of exploitation.

The Alley Tramp will probably bore most viewers and is probably only appealing to weirdo H.G. Lewis fanatics like myself.