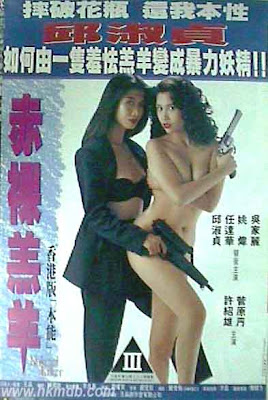 If you took a sleazy Category 3 flick and crossed it with a John Woo action movie like Hard Boiled you would end up with something like this. I of course not being the biggest fan of Hong Kong gun-fu flicks this movie was a breath of fresh air for me.

The Naked Killer relies more on its over the top violence, raunchy dialogue and sheer sleaze factor then the actual shoot-em-up stuff. Sure we have all of the exaggerated shoot outs but they almost seem more comic bookish then anything else.

The movie follows a cop who is tracking down a group of female assassins. These hot Asian babes are known for shooting their victims full of holes, breaking arms and legs and almost always causing some sever genital damage. They cut the dicks and balls off of the men they kill and in one of the more memorable scenes a stupid cop eats the severed dick of a dead man, mistaking it for a sausage.

The plot thickens when our main character learns that the assassin that he has been tracking is a young girl named Kitty who he fell in love with a while back. From here on The Naked Killer turns into a demented romance flick and makes American movies in the same genre like True Romance pale in comparison.

Kitty is the only girl for our dead-beat cop (literally). Ever since he witnessed his brothers death during a cops and robbers shoot out, he has been impotent. The day he met Kitty he became as he says "Hard as a rock" and she is the only girl in the world that can cure him of this affliction. Naturally Kitty is very important to the cop. More important then the police force and even more important then his own life. If that's not a twisted love story, I don't know what is.

The movie also sports lots of hot lesbian action and a bunch of sleaze-bag, rapist men. These moments of course help The Naked Killer achieve its Cat III rating. While this movie undoubtedly would appeal more to a male audience it still can be a fun watch for couples. That is providing your best girl isn't a typical, jealous, paranoid freak. Naked Killer has this sort of romantic charm to it but it is of course all done in very bad taste. We do get some bare breasted babes here and there but the film works perfectly the way it is and that being hot scantily dressed Asian babes who will shoot you full of holes and break your neck.

Some of the other highlights involve a man who has his achy-breaky skull smashed in with weights (complete with head explosion and splatter), violent genital stabbing, an exploding house, suicide, rape, dead cops and really funny dubbing. Even the subtitled versions are all really funny and to top this all off the film is very well made, with very slick camera work, plush sets and very nice lighting. I recommend only picking this thing up if you can find it uncut. The cut version can be missing as much as 11 minutes. 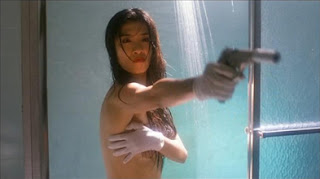