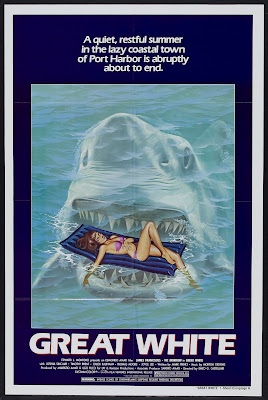 This Italian Jaws ripoff typically goes under a million different titles. Here are some of the alternate English titles The Last Jaws, Great White, Jaws Returns, Shark (Not to be confused with the Sam Fuller film of the same title). My reason for giving the alternate titles is to make it easier for you to dig up this movie. Its a must see.

What we get is a over the top Italian take on Jaws. There for in my opinion its better then the original and way better then all the shitty sequels. Personally not being the biggest fan of Spielberg's film in the first place due to the fact that its mostly drama and lacks in gore and general shark-fu, I have shyed away from the Italian ripoffs for far to long. Big mistake!

First off we get a way bigger shark. This thing is fucking huge! Secondly these Italian sharks blast people from the water in what looks like giant explosions. Naturally the actors turn to dummy's when they are launched twenty feet into the air but when they come crashing down to the water they are mauled and usually partially eaten by the most hungry shark in cinematic history.

The best part is that this shark doesn't even seem to want to just feed itself. It seems to have a grudge against people and does its best to terrorize, and mangle anyone who gets to close to the water. In one of the best moments the shark bites a mans legs off who is hanging from a helicopter and then brings the chopper down into the water with it.

Castellari uses the perfect mix of stock footage (which surprisingly worked very well) with his own brand of special effects.

I think Joe Bob Briggs said it best when he said "Spielberg makes movies for mom not dad" I couldn't agree more and I'm sure Briggs would agree that Castellari makes bad-ass movies for pop and not mom.

Check this thing out to see Vic Morrow survive one more helicopter crash and go to war with the biggest, baddest shark of em all. The Last Shark has some truly funny moments that will have you scratching your head and wondering if your eyes are playing tricks on you. Then in the next moment offers up dismemberment and gore galore. 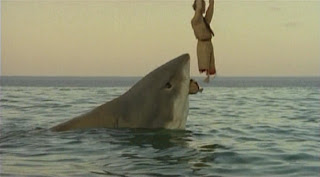