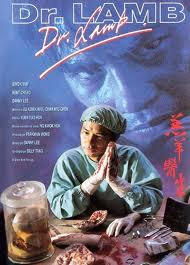 Here's an earlier Hong Kong Category 3 film from director Danny Lee (Untold Story a.k.a. Bunnman). This ones a nasty tale of a perverted taxi driver who likes to strangle young girls. The he takes the bodies home where he will put makeup on them, take pervy pictures, fondle the corpse and eventually saw them up with a circular saw. Why this movie is called Dr. Lamb is beyond me. The killer is not a doctor nor is there any doctors in the film that make any kind of difference. I also find this infamous title to be slightly over rated. Most of these serial killer/rapist Cat. III films are all pretty much the same. This one plays very much like The Untold Story and Diary Of A Serial Killer in the sense that the story is told from the killers point of view from behind bars after being severely beaten by the police. There are some shocking scenes, mainly the disposal of dead hookers. When our killer chops up the bodies with the circular saw blood and guts fly all over the place. The walls are splattered bloody red and chunks of guts fly into the fish tank which I thought was pretty nasty. The killer also keeps some souvenirs. In one scene he cuts off a girls breast with a scalpel and puts it in a jar. Later in an investigation scene the jar falls off a shelf and lands on a fat man. The boob lands on his shoulder and the filthy stinky water is all over him. This leads to a Three Stooges esque dismembered boob juggle. It is tossed from one cop to another and eventually lands on a girls back as if Curly threw a mouse down the back of a dress at a diner party. The movie manages to supply a bit of tension in one scene where our killer picks up a school girl in his taxi. He feels that she is "good" and everyone else is bad. He creeps her out, telling her how she has to keep her innocence. When she tries to make a run for it the taxi driver chases after her in the rain. It doesn't end so nicely for the Innocent school girl but it makes for a pretty creepy scene.
Dr. Lamb is worth a watch for Cat III fans but in my opinion doesn't come close to movies like The Untold Story and Ebola Syndrome. There is just not enough going on here plot wise. Dr. Lamb is just another sickie quickie from China. Could have been worse and could have been better. Fans of this movie or Danny Lee's style in general should check out Diary Of A Serial Killer. 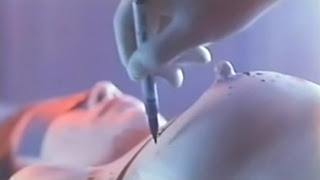