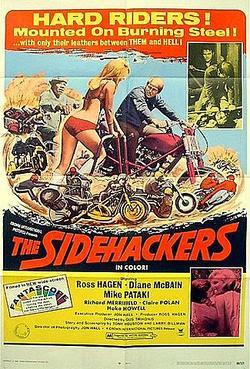 For those out there who don't know what a Sidehacker is, it a motorcycle with a sort of side car on it and it allows a passenger to stand up or hang off the motorcycle and drag their ass on the road. Its really a team work sort of thing where the passenger in the sidecar helps for quicker turns and what not. I'm not sure if this was a actual sport back in the old bizzaro days but it looks pretty cool in this 1969 revenge flick.
This one also goes under the title of Five The Hard Way but I'm a bigger fan  of Sidehackers. Sidehackers opens up like a typical boring motorcycle exploitation flick with lots of "sidehacking" around a bumpy dirt race track. Its not long before this thing completely changes directions and becomes a nasty rape/revenge flick.
Our main character is played by Ross Hagen who some might remember as Speed from Al Adamsons Angels Wild Women. Ross Hagen reminds me of a B-movie version of Charlton Heston with a horse voice. This time Hagen plays Rommel a Sidehacker who is soon to be married. Rommel finds himself mixed up with a psycho biker named J.C. (I guess we can call him a Motorpsycho.) J.C.'s girl has a thing for Rommel but when Rommel turns her down she cries rape to her sadistic boyfriend J.C. This pisses J.C. off really bad and his form of justice is to rape and murder Rommels soon to be wife. Then we get a bad montage of Rommel morning over his fiance with a song that you would expect to be in a Blaxploitation flick that explains exactly how he is feeling. Rommel groups up some bad-ass friends and plots out his revenge.
Its so obvious that the sick sick 70's are right around the corner here because this really is a nasty picture. The movie ends with a bloody shootout between Rommels crew and J.C.'s. There are a couple of excellent squib shots that are very convincing. One is a bullet to the knee and it almost looks like theres some bone and meat protruding from the leg.
Its funny that this movie is better known with the Mystery Science Theater 3000 commentary because I really thought it was a awesome movie with a great 70's style nihilistic ending. I have not seen the MST3K version of this movie yet but now I want to. I can't see them laughing through the films final. 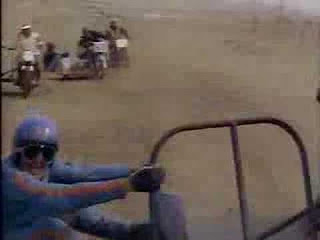