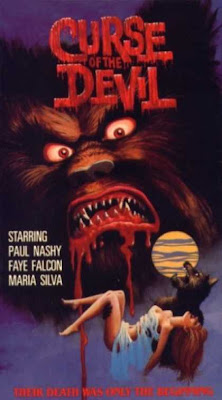 Paul Naschy really likes doing these werewolf movies. Its a shame that I don't always enjoy watching them. This one is pretty boring all around. Curse Of The Devil opens up with two knights dueling it out on horseback. One of them is decapitated and the head is held in front of the camera for gore hounds to gawk at with the awful 70's style blood that we all know and love and its more silly than ever here. Then we have some witches being hung and another burned at the stake. Before the witch is burned alive she places a curse on the family who is responsible. We jump forward in time and a axe murderer is on the loose along with a werewolf who is of course played by Paul Naschy. Unfortunately the murders are not shown in enough detail. We see axe's coming down but never really get to see anybody being hacked up. The same goes with the werewolf scenes. We get a little blood here and there but not enough to save the movie from being a bore-fest. My personal favorite scene consists of a pick axe to the chest and a bit of splatter on the camera lens. There is also a a scene with a man who's face has been shreaded by the claws of the wolf. We also get a few naked babes running around and of course a few man to wolf transformations but they don't really offer anything new. Aside from these few decent moments Curse Of The Devil is pretty slow. Naschy completest might dig this one but the rest of us should skip it. 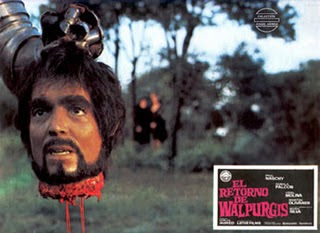