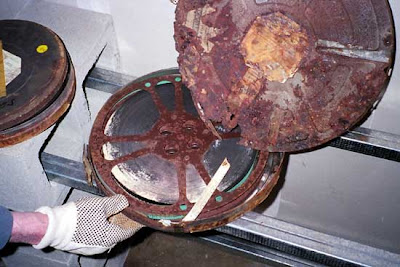 I was very disturbed to hear the news from a friend who works in a multiplex that he will be firing all his projectionists. Why would anybody want to fire all the projectionists at a movie theater? Well because film is obsolete. Since everybody shoots on digital now there is no need for 35mm projectors anymore. One by one the screens are being ripped down at the local multiplex's and new digital screens are taking their place. The screens are at the height of technology and the picture is supposed to be ten times more clear then a 1080P digital screen and Blue Ray player. This means no grain, which means no ageing which means no classics. The new system is basically a huge ipod. The new digital movies are uploaded into this new player and then its transmitted over to the screen. This means that people will be paying their 12 bucks or whatever it is to go watch T.V.. Why would anybody go to a theater to watch t.v.? I asked my friend at the multiplex what the point of all this was and he said aside from the difference in a clearer picture this allows theater owners to pause, stop, and rewind a movie. I asked him what the point of that was and he said "lets just say a fight broke out in the theater or someone pulls a fire alarm or the sound goes out for a second. This will allow us to stop the movie and go back to were we left off." How stupid is that? Apparently it might be a normal thing for the theater to stop your movie. Does this mean I get a remote and can pause the movie when I want to take a piss or get some over priced popcorn?
This process of eliminating film in theaters is very expensive. Were talking hundreds of thousands of dollars. So the Art-Houses won't be able to afford this. Which means the art-houses that play cult films and foreign films might do okay but the little guys who were trying to compete with the multiplexes are all going to go under.
As if this news isn't bad enough, this new equipment can not even play old film unless of course it transferred over to digital and uploaded into this new system. Not that the multiplex's would ever play anything old anyway.
Eventually they destroy everything. The Drive-Ins are all gone and now they are taking film out of the theater. I never thought that when I get old I'd have to tell my kids what it was like to see a film on a screen but I guess the future is here and I don't like it.
Posted by Paul Awful at 2:36 AM

Email ThisBlogThis!Share to TwitterShare to FacebookShare to Pinterest
Labels: Film Is Dead, News