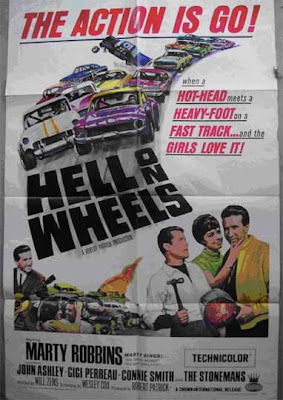 Not even slightly interesting piece of garbage about a racecar driver played by Marty Robbins and his jealous brother. For 97 minutes we get to watch Marty Robins drive in circles on a race track or play awful country music in a night club. Marty's younger brother played by John Ashly (Brides Of Blood) is a whinny little brat who is determined to beat his brother in a race. Then theres this stupid subplot about criminals and their moonshine stills. The brothers get caught up in their racket for a bit but it only eats up about 10 minutes of the crappy screentime.
It was pretty hard to make it through this thing. I found myself trying to find one redeeming value aside from John Ashly and the only thing I could come up with was that I liked the grandpa character because the majority of his screen time he was sleeping. I guess I just felt I could relate to the old man. If you don't want to sleep, stay far far away from Hell On Wheels. On the other hand if you need a good sedative it might be of some use. Ya know what, scratch that. The loud motors will keep you up. Just stay away from Hell On Wheels all together!
Posted by Paul Awful at 1:42 AM

Email ThisBlogThis!Share to TwitterShare to FacebookShare to Pinterest
Labels: Hell On Wheels, On The Road