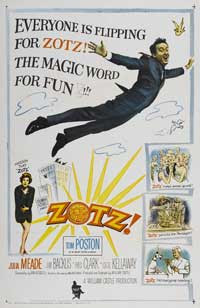 William Castle changes it up at the height of his gimmick career and does a comedy. Its a weird comedy about a man who is given a coin that holds a strange power from an ancient civilization. Are you guys ready for this? Its the power of a word... Zotz! The back of the coin has an inscription explaining the three powers that come with the holder of the coin and the word Zotz! Rule number one, The extension of the index finger pointed in a persons general direction will cause sudden pain. In other words if I hold the coin and point at you, you will fall over in sudden pain. Rule number two, the word Zotz causes temporary "retardation" to anything in site. For example if I hold the coin and look at you and say the word Zotz! Out loud, you will move and speak in slow motion. The third rule is the most dangerous, he who holds the coin has the power to destroy anything in sight. All he has to do is point at someone or something and say the magic word at the same time and it will cause sudden death.
What a strange concept for a comedy. Eventually the coin causes all sorts of trouble. The Mafia the government and the military all want their hands on Zotz! There is a really cool scene towards the end where our main character is dodging bullets and jumps from a sky scraper in slow motion (thanks to Zotz!). Theres also a funny Three Stooges bit in there with some mice thrown into a diner party. William Castle fans will also get a laugh out of the Drive-In scene where a couple go see Homicidal.
Zotz! was a change of pace for me a step away from horror and trash film for a moment and a fun time with a strange comedy from the king of gimmick. 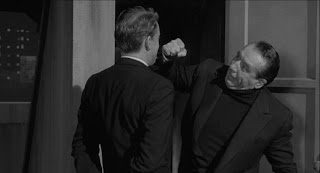