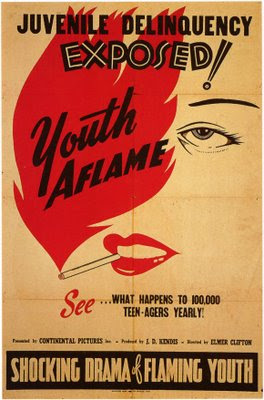 Another juvenile delinquent flick from the guy who did Assassin Of Youth and Swamp Women. This ones about two teenage sisters. One is a nice girl who respects her daddy, does her school work, keeps up with the house and is seeing a nice boy. The other is a selfish brat who hates her family, hates school and is running with older hoodlums, which makes sense because the alternate and better exploitation title is Hoodlum Girls. The girls don't have a mother and their father can't be hip to everything the girls are doing. Dad doesn't catch on till the police arrive at a teenage milk-bar club called the "Jive". One of daddies little girl spiked the punch and the clean-cut milkbar is shut down. By the time dad tries to confront his daughters its to late. The bad girl ran off with her bad boyfriend but when he refuses to marry her she pulls a gun on him. The two hoodlums wrestle for the gun and the nice Innocent daughter is caught in friendly fire.
I usually tend to like all of these juvenile delinquent movies. This one is far from my favorite but its still a fun watch if not for anything else just to laugh at some of the silly shock-of-the-time stuff. In one of my personal favorite scenes the bad daughter comes home drunk and unbuttons her blouse in front of her innocent sister. She has a slip on and the innocent sister huffs in disappointment as says "where did you get that?" The bad sister replies, "The booze or the slip?" Theres also some cool scenes in a bar with chicks in dresses doing some old time dance/acrobatic acts. We also have one really cool juggling act and a really bizarre ending with a group of children playing She Will Be Coming Around The Mountain When She Comes. This scene just needs to bee seen to be believed. 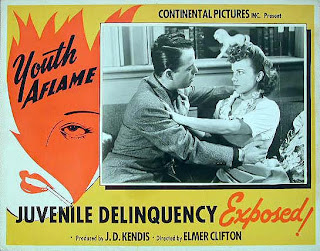