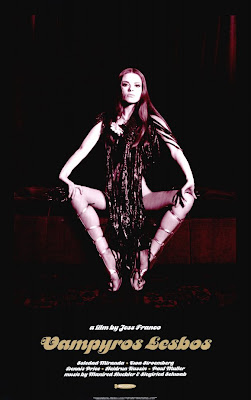 Although sexually charged this early 70's lesbian vampire film comes off rather classy for Jess Franco. Its also in my opinion one of his most visually pleasing films. The color schemes and camera work is excellent and helps depict the sexy vampires as almost elegant. Franco chooses to shoot through glass in many scenes, either a window, glass door or mirror and on occasion has blood trickling down the glass to portray a dreamlike moment. The film never comes across as trashy, as many of his other films do like Barbed Wire Dolls or his Ilsa entry. I think I do prefer his trashier work but this one was still a nice watch for me.
Vampyros Lesbos lacks a bit in the story which is pretty normal for Franco. Its about a sexually frustrated women who isn't happy in her current relationship so she takes off to shack up with a sexy vamp who inherited her estate from Count Dracula.
I thought it was a bit silly that the film chose to bring up the king of all vampires but at the same time I never try to take a Franco film seriously. Another thing that I found odd about this one is that the vampires spend most of their time on the beach (naked of course) in the daylight. Franco references Dracula but denies the basic foundations.
There is no lack of nudity here. Between the lesbianism and the sunbathing we have plenty of flesh to look at. If you're looking for a typical low budget Euro-Trash flick you probably will want to skip this one but if you want an erotic art flick this one would probably do the trick. 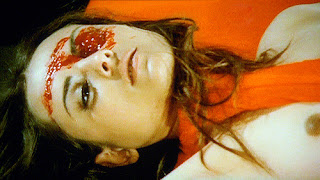