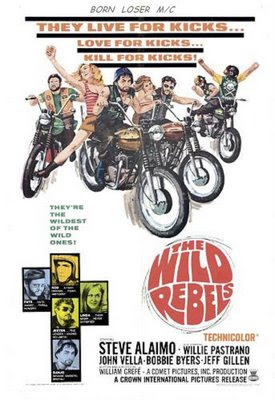 A race car driver joins a motorcycle gang called Satan's Angels as a getaway driver for their new big bank robbery. What the gang doesn't know is that their new pretty-boy gang member is working undercover for the police. Things don't work out as smoothly as the police thought and the movie ends in a nasty shoot out in a lighthouse.
This one really has very little bike riding scenes but makes up for it in the violence department. The gang is really small and its pretty laughable. The leader and the brains of the gangs name is Jeeter. Jeeter looks the part of a biker but speaks more like a college professor. Then we have the exact opposite, a fat bastard named Fatty. Fatty can't speak at all aside from making the occasional choo-choo train noise. My favorite member of the gang is Banjo. Banjo pretty much comes off as retarded but hes also the only member that could pass as a real biker. Banjo is the brawn of the gang, all he wants to do is drink and fight. Hes always at someones throat and he always takes the violence one step further. In one scene he has Fatty hold up a mans head (who has already been knocked out in the fight) so he can run up and kick his head like a football. This scene comes across somewhere between humorous and disturbing, if that makes any sense. The last and final member is the gangs momma. She helps the gang in their robbery's and also gives them plenty of reasons to fight. Lets say for instance a "square" asks her to dance, the gang will happily break bottles over their head and smash in their face with chains.
Wild Rebels really doesn't get good until the end. The movie opens up with a pretty cool theme song but unfortunately its not heard again. Instead we get an awful soundtrack with some of the worst dancing I have ever seen in a movie. The undercover race-boy also feels the need to play really awful songs on his guitar and there is one scene in particular where he is lip-singing with a band and its rather embarasing to watch. One thing that I found a bit surprising is that there wasn't one nude scene. A bit strange for a Biker Exploitation flick. For me Wild Rebels really delivered in the final. The bank robbery scene is cool and its followed by a nice car chase and it all comes to a end in a Wild Bunch type shoot out at the end. Through the whole movie the gang explains how they are not in it for the money "We do it all for the kicks" but the audience can tell that the future is pretty bleak and once the gang realizes, its already to late. The cops drop like flies as the Satan's Angels blow em away one by one with shotguns, hand guns and automatic weapons but there is no way out and no escape.