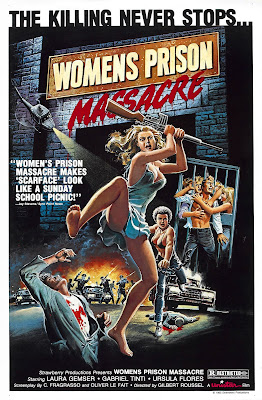 To all those horror-snobs out there who like to bad-mouth Bruno Mattei, I have just one thing to say... Women's Prison Massacre! The director has plenty of entertaining titles to his name but this one probably takes the cake and is amongst the best in the (W.I.P.) Women In Prison genre.

Women's Prison Massacre also known as Emanuelle In Prison, a.k.a. A Bunch Of Bastards, a.k.a. Blade Violent, a.k.a. Emanuelle Escapes From Hell and various other titles from different countries stars Laura Gemser yet again in another Black Emanuelle role. This time stuck in a hell hole for female inmates. Lorraine De Selle who I remember best as Gloria in both Cannibal Ferox and House On The Edge Of The Park plays the wicked warden. You pretty much get exactly what you would expect from the character minus the lesbian stuff. Still she offers up the typical scenes of unjust punishment and savagery which is mainly taken out on Emanuelle.

Women's Prison Massacre offers up the necessary full frontal female nudity and all the depravity that comes along with these W.I.P. movies. Shower scenes, masturbation, lesbianism and just plain dancing in the buff is all here for the viewing pleasure of the average degenerate. However things get really good when a ruthless band of  male cop-killers arrive at the women's prison. You guessed it, we are going to have a massacre on our hands. These guys are pretty tough dudes. They are all sentenced to death for multiple rape charges, murder and as I mentioned killing police officers. The leader of the criminal gang goes by the name of Crazy Boy and he has the biggest body count to his name. Crazy Boy done killed himself 17 cops and the numbers will increase before the credits role. However the best member in this gang of slackers is Blade. Blade is one sick mother fucker. This cat enjoys cutting girls up with razor blades which obviously helped him achieve his cheesy nick name.

For me the main thing that separates Women's Prison Massacre from other W.I.P. flicks is how much fun they make the male criminals seem. These guys are as bad as they get but for some reason you can't help but be on their side. They pretty much rape all of the inmates and take the guards and the warden hostage along with some cops and they kill them at will. As the tagline on the poster says "The killing never stops..." This movie has such a huge body count to it and it is so fast paced that the ending almost lets you down. This is the perfect party movie. It is sure to liven up any group with its 90 minutes of sex and violence.

Bruno Mattei maybe known by most as a hack-job who will rip any movie off without any shame. Well I enjoy him for this reason. Sure he has shit out quite a bit of garbage in his day but it is movies like this that make Mattei a household name at movies from mars.

Fans of this movie should also check out some of Mattei's early Nazisploitation flicks like Women's Camp 119 and SS Girls both of which are good exploitative fun in bad taste and for those who have not yet seen Women's Prison Massacre get ready for knife fights, car chases, brutal shoot outs, face slashing, throat slicing, Russian roulette (complete with flying brain matter), some very nasty penis mutilation and memorable quotes such as "I will bite your nipples off". In other words its a god amongst Italian exploitation films. 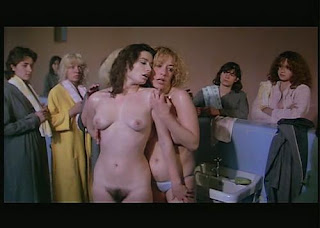