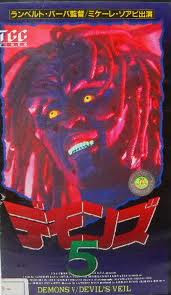 The legendary Italian director Mario Bava is amongst the greatest film makers in horror history. His son Lamberto Bava although an acquired taste is rather hit or miss. Lamberto Bava started off strong with some very graphic and memorable splatter films from the 80's. Lamberto's earliest work (Demons, Macabre) is without a doubt his best work. As time went on the films of Lamberto Bava seemed to have gotten worse and worse. Demons 5 : The Devils Veil also known as Black Sunday (1989) is a perfect example of Bava Jr's. not so great work.

Lamberto Bava remakes his fathers classic Gothic horror film Black Sunday. He takes the film in a very different direction but somewhere along the way the remake falls very short. It starts off with a group of vacationers skiing in the mountains. They fall into a deep pit with no way out. One of them breaks their leg and the others seem to care less. They find a body buried in the snow with The Mask Of Satan nailed to the face. They remove the mask from the corpse and all hell breaks loose... Literally.

Next the group of vacationers are terrorized by an evil witch named Anibas and the film becomes very repetitive with scenes of sexual deviance and debauchery. It all comes in tact with typical possession & exorcism type stuff. Female nudity, whippings and of course some very bad dialogue. From what I have read this is a pretty rare movie and was barely seen in America. I can't exactly say that this is a bad thing considering that the movie was pretty lame and adds nothing new to Mario's classic tale.

Only worth looking at for Lamberto Bava completest and even so, I wouldn't expect much. The print I saw was almost completely drained of color. The images of gore that splatted its way across the screen were to soft to enjoy but even if someone released a pristine print I do not think it would be much better. My personal favorite moment shows the vacationers telling a girl with a broken leg to "stop crying. Were on vacation and we want to have fun". This one is just bad. 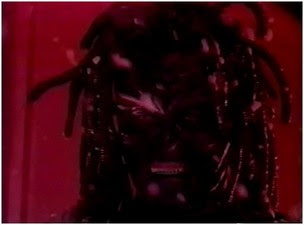