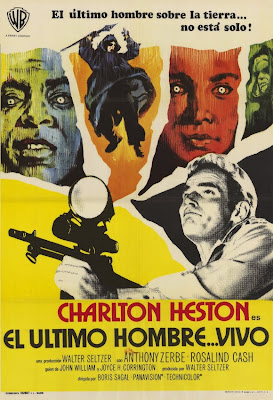 My mother first showed me this movie when I was about ten years old. It scared the living shit out of me and has remained a favorite of mine for decades.

Taken from the 1954 novel I Am Legend, The Omega Man is the second film adaption of the book. The first being The Last Man On Earth with Vincent Price. There would be many more adaptions and remakes to follow of the years including Danny (Trainspotting) Boyle's 28 Days Later and of course the 2007 shit-fest I Am Legend with television loser Will Smith. Out of all of them, The Omega Man remains my favorite. It is action packed, creepy and has a social message to go with it.

Charlton Heston (Soylent Green) plays Neville, a scientist who survived a plague with the help of an experimental vaccine. Neville is the last man on earth. That is with the exception of an evil cult who walks the night in dark cloaks, trying to kill the scientist. The cult or "the family" as they like to call themselves blame science for the plague that shook man off the earth. They view Neville as the last living memory of an evil scientific world and they must kill him before he kills them. Neville is outnumbered hundreds to one but he does have a few advantages. The plague has affected the family members in such a way that they can not go out in the day time. They are overly sensitive to light in a similar way that a vampire would be.

Neville has another big advantage over the family that outnumbers him. He has the use of electronics and machines. This being everything from automobiles to guns. Since the family blames science for the end of civilization they are dead set against any modern machinery. They use primitive weapons such as make shift knives, spears and flaming torches. "Fire will cleanse the world". "We will kill that thing. That creature of the wheel".

Eventually Neville learns that there are some other survivors who have been hiding in the mountains, away from the family and Neville who they viewed as equally dangerous. When they learn that Neville has the answer to the plague they join forces with him but they consist of one man, one woman and a bunch of children. Neville sees this as a hope for the future but realistically they will probably just slow him down.

The Omega Man offers up plenty of shoot-em-up scenes, a creepy cult with rotten faces and crazy eyes, some 70's style interracial love making (complete with female nudity), explosions, corpses in the street, a typical 70's downer ending and a very good story. The acting is mediocore depending on the cast member but this doesn't slow down the entertaiment factor at all. Its a timeless cult classic and it comes highly recommended from yours truly over the many other retakes from the 50's novel.