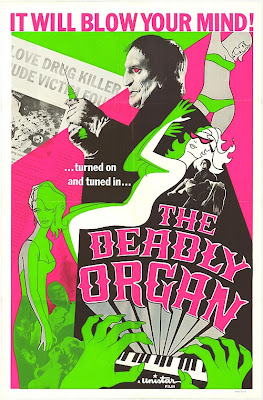 This slice of Argentinian sleaze comes from director Emilio Vieyra, the same cat who would go on to do the insane The Curious Doctor Humpp and the English dialogue was written by Jack Curtis who I remember best as the director of the awesome 60's monster-rama gore flick The Flesh Eaters but unfortunately The Deadly Organ doesn't quite compete with either of the films just mentioned. 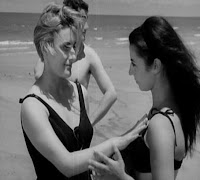 Fans of the superior The Curious Doctor Humpp should understand what I mean when I say the The Deadly Organ is weird, sleazy and interesting but a bit slow moving and confusing. The Deadly Organ is actually extremely slow paced. The only thing that saves the film from putting its audience into a drooling coma is just how strange it is. Of course the good looking Spanish women and the gratuitous nudity helps out a lot but for me the main interest in the film is within the subtext of the plot.

The Deadly Organ is probably known better as Feast Of Flesh by most due to the fact that this is the title it screened under in the United States. It ran on a double bill with the awesome sex & violence filled monster epic from Mexico Night Of The Bloody Apes and the two films would be released through Something Weird Video on a double feature dvd. The Deadly Organ is clearly the duller of the two but as I mentioned the story is strange enough that it works.

Although at times The Deadly Organ may seem like a monster movie it absolutely is not. Its more of an early slasher film then anything else. We have a masked villain that is terrorizing the women of a small town but our killer is not just content with slashing up young women. He lures them in with an entrancing tune from his Deadly Organ. The music gives the film a dream like vibe and is repetitive but pretty cool at the same time. Then the masked killer hooks his victims on heroin and with the help of the entrancing music the females become completely obsessed with him as if he were a drug himself. Then of course he kills them. His weapon of choice is in fact a giant syringe which he plunges deep into his victims chests and leaves them over dosed, cold and dead. Of course he changes it up from time to time and we do get some strangulation and knife-fu but it is usually a giant needle that is found buried in the chest of a corpse.

Now if that's not a cool and twisted plot, I don't know what is. It is never really spelled out but The Deadly Organ almost plays like a warped anti drug horror movie, similar to something like Blood Freak or Frank Henenlotter's Brain Damage. Some would probably say that I am over analyzing this cheep exploitation flick a little to much but there is definitely some kind of social message wrapped up inside this bizarre stalk and kill flick.

The majority of the characters are supposed to be part of the younger generation, the hip generation. They run around naked, listen to "weird music", drive fast cars, have sex with anyone they please and use drugs. The older generation fears for the future and the main characters who represent the older folk are two police/detectives. These guys can't seem to get it right. They can not find the killer any quicker then they can understand the youth. They always seem to a be a bit to late and even when they have a full proof plan some how it falls to shit.

The Deadly Organ is kinda like a drug. You can be wide awake but once you fix yourself you drift in and out of consciousness. If you nod out, you will be pulled out of your dreamlike state for another dose of murder and weird bloodletting. This is not recommended for most. Only hardcore exploitation enthusists will be awake by the films final reel. 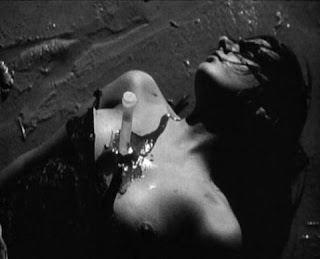