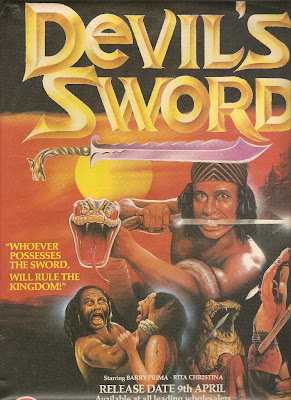 So, whats your genre of choice? Fantasy, sci-fi, horror, kung fu, romance or Bollywood type song & dance flicks? The Devils Sword blends all of the above into one big chaotic package and has something in it for anyone and everyone. That is providing of course that you don't mind a little insanity and anarchy with your movies.

A village is attacked during a wedding ceremony by an evil warrior who makes his entrance on a flying rock. He kills just about everybody in sight except for the groom who he was sent to kidnap and the wife who is a bad-ass kung-fuing bitch. We are treated to a giant massacre with severed limbs and decapitation. Indonesian cult icon Barry Prima or (for those familiar with the cannibal flick Primitives) as I like to call him Berry Prima shows up a day late and a dollar short. He makes it just in time to see the whole village bleeding to death and his arch enemy running for the hills or in this case the caves with his captive groom.

Berry Prima seeks out his master who also got his ass kicked by the evil warrior and is left a bloody mess. Naturally Berry cuts his masters legs off to prevent infection from spreading. Once his master regains his strength he informs Berry of the evil queen and the worlds evil warriors who have band together to help her find The Devils Sword. It is up to Berry to beat them to the punch and get to the mystical sword before they do or else "This will be the end of the world as we know it". Berry takes the kung fu bride with him on his quest for The Devils Sword. Along the way they fight alligator men (not to be mistaken for the 50's monster movie), skeletons, evil witches and statues that shoot laser beams from the eyes. The unstoppable force that is Berry Prima also proves that he can shoot lasers of his own from the palms of his hands.

Berry does find The Devils Sword but has to fight and kill a giant cyclops monster before becoming the rightful owner. He takes to the evil queens cave where he becomes hypnotized and takes part in the queens perverse orgy. Unfortunately with the exception of a mans asshole and testicles we do not get any other nudity but that's okay because the film has just about everything else you can think of from flying guillotines to cannibals. Bodies are split in half and then rejoined with weird magical powers. Heads explode and limbs go flying. The saw wielding alligator-people are weird enough on their own but when you add all of these elements together you are in for one hell of a crazy ride.

Blood and gore. Kung fu and monsters. You know you want to see it at least once.