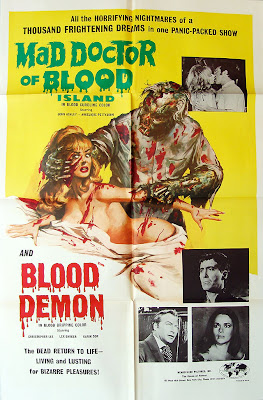 Mad Doctor Of Blood Island is the second film in the Blood Island trilogy. For those familiar with the insanity of the first film Brides Of Blood, this follow up is pretty similar in pace and madness.

John Ashley arrives at Blood Island for a another go against mad scientists, green-blooded monsters, mutant trees and of course a bit of love making. This time around Angelique Pettyjohn serves as the titular blond sex appeal and has John Ashley running around the Philippines with a hard-on.

Our blond, boobilicious, bimbo has a bad habit of roaming around the jungle on her own and being stalked by the green-blooded monster. Luckily for her, John Ashley always seems to show up just in time to chase the killer away.

The natives on the other hand are not quite as lucky. In some of the better scenes we watch the green monster pull heads off and rip guts out. Aside from the decapitations and the disembowelment the monster does get a bit rape-happy in one scene when her rips a villagers clothes off and claws her body to shit. Mad Doctor Of Blood Island also offers up some real animal death in a sacrificial offering scene. I believe it is a goat and a pig that fall victims to the knives of the natives and these scenes always serve to disturb your vegetarian friends a bit, so that's a plus.

While I am a fan of the whole Blood Island trilogy, the monster in Mad Doctor is a little bit less humorous then the bubbly headed one in Brides Of Blood and this might have been the most uncomfortable makeup of all time. While some of the victims are painted green from head to toe, other unfortunates are covered in some kind of green grassy type shit. I start itching myself just from watching it and I can't imagine what it was like wearing it. The monsters are cool looking and it is all just so weird that you have to love it. On the down side these movies all tend to be a bit slow moving with way to much bad acting and long dialogue scenes that you have to sit through before the next monster-rama gore sequence comes up. They also used a really horrible camera affect on this one. Whenever we see the blood monster, the camera pulls in and out very fast from extreme close up to the opposite. This of course makes the movie even weirder but lets be honest here. Its stupid and a bit annoying. Especially if you have seen the movie more then once.

Mad Doctor Of Blood Island is a perfect example of a Movie From Mars. It is to weird to not love it! 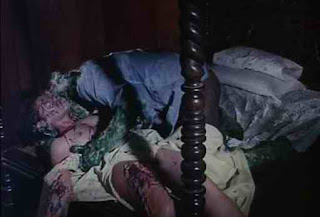