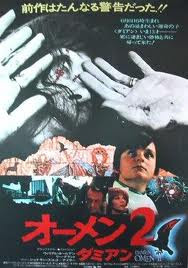 The Omen 2 is one of the best horror sequels ever made. It certainly is better then any of the Exorcist sequels and it always makes for an entertaining watch.

Damien is now thirteen years old and we all know that when a boy hits the age of lucky 13 he starts to act a little crazy. Well the same thing goes for the son of the devil. For those familiar with the first film, Damien killed off his parents by the end of the movie. Now adopted by William Holden (The Wild Bunch) Damien has a whole new family to kill. In some of the more memorable moments we see a man get split in half in an elevator, a woman has her eyes plucked out by a bird in what seems like an Alfred Hitchcock homage. A man meets his end under the ice while ice skating, another is crushed between two train cars, we have a stabbing and death by explosion.

The thing that makes this sequel so interesting is that Damien is now learning who he is. He has had followers and enemies since his birth but when he hits the age of thirteen he becomes aware of his awesome power. Anyone who stands in his way will meet their end by Damien's super natural force. Amongst his followers is Lance Henricksen (Terminator, Pumpkinhead). Henriksen has a way of making sequels better doesn't he? Remember him in Piranha 2 : The Spawning? Lance Henrikesn informs Damien that one day the whole world will know who he is but until then he must remain quiet. He tells Damien to read the bible, chapter 13, revelations to have a better understanding of who he really is. Once Damien figures it out he doesn't exactly remain neutral. He poisons all of his classmates, he mentally destroys his teacher and even goes as far as to kill his best friend and stepbrother. There would be three more Omen movies and even a remake in the series but none of them can touch the first two films. The Omen 2 comes complete with a driving musical score, some pretty good acting and some unique death scenes.

This one tends to play on television a lot as we near Halloween. Of course they leave some of the brutality out as far as the man being split in half in the elevator and the women being run over by an eighteen wheeler truck. Check it out for some fun with Satanic children and killer birds. 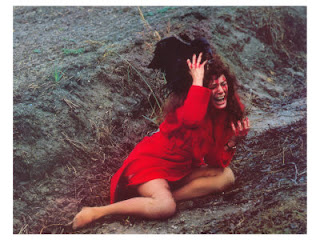