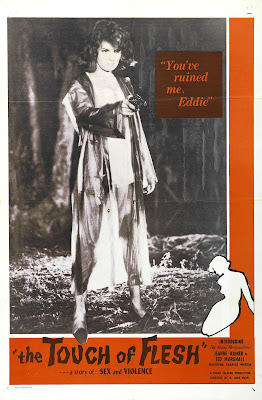 You've Ruined Me Eddie also known as The Touch Of Flesh, not to be mistaken for the Findlay's movie Touch Of Her Flesh is a pretty strange one. It plays like a cross between a 50's juvenile delinquent film and a teen scare film. 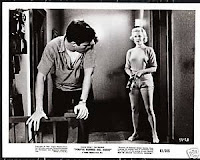 Actually if you really think about it You've Ruined Me Eddie is actually the opposite of a juvenile delinquent flick. The main character is actually a good, straight laced kid but he just gets all the tough breaks.

Eddie is an orphan with a really bad rep. His mother was a whore and nobody knows who Eddies father is. The kid doesn't even have a real last name. When he was just a child his prostitute mother was killed and Eddie was sent to a home for boys. Now he lives in a small shoe box for a room and pays the rent with the money he gets from his shitty job at the laundry shop. Eddie has himself a rich spoiled brat for a girlfriend named Joan Denton who's father had the town named after him. Eddie knocks Joan up and nice boy Eddie wants to get married and have the kid but Joan feels differently. She wants an abortion and what Joan wants Joan gets. Joan's father frames Eddie and has him arrested. Eddie gets the shit kicked out of him by the cops and nobody wants to help him until a lawyer happens to catch wind of what is happening in this town. Eddie breaks out of jail and Joan goes ape-shit crazy. She goes on a bit of a shooting rampage and it all comes together with a shocking and a bit disturbing ending.

You've Ruined Me Eddie is nice and short. It clocks in at around 70 minutes. However the cheap exploitation flick is not without flaw. It has its slow bits. The story is interesting but minimal. The soundtrack is lame and the characters are a bit one dimensional. Still I enjoyed this one for the most part. I like the fact that the bad guys are those with money and power. The police are scum, the rich are no better and the only characters who have any bit of a soul are the poor white trash, living on the hungry side of town.

This one serves as an okay time waster. It comes complete with murder, police brutality and babes dancing to bad stock music in their nighties. 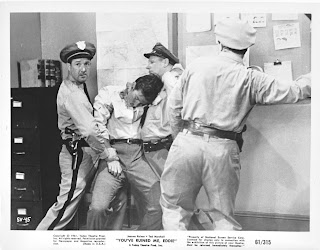 Email ThisBlogThis!Share to TwitterShare to FacebookShare to Pinterest
Labels: 1000 Faces Of Dirty Me, Juvenile Delinquents, Touch Of Flesh, You've Ruined Me Eddie