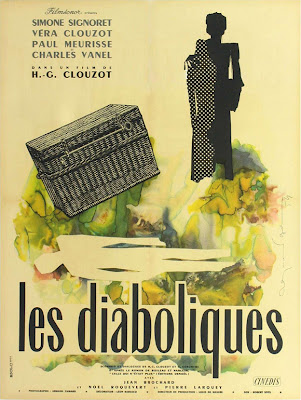 The very end of Diabolique ends with this quotation "Don't be diobalical yourself and reveal the end of this movie to your friends" well I am about to do just that, so if you have not seen this movie you would probably want to just skip over this one blog post because this is nothing more then one big spoiler.

Diabolique is brilliant in every sense of the word. Alfred Hitchcock himself wanted to direct this movie but was beat to the punch. It is hard to watch Diabolique and not think Hitchcock and fans of his films have no choice but to like this movie.

It tells of two female school teachers who are sick of the abusive man in their life. One of the women is married to him and the other is simply his "mistress". Either way the two women bond in their misery and decide to kill the man that is to blame for their pain and when I say pain I mean both physical and emotional. 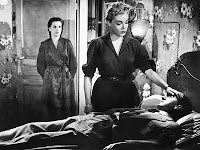 They plot out an elaborate yet brilliant murder. First they drug him. He falls into a deep deep sleep. Next they drag him over to the bath tub and drown him. Then they dump his body in a murky swimming pool and just wait for the body to be discovered. There is more to the plan but this is the general idea.

Well time goes by and the corpse is never found. This sends both of the murderers into a state of maddening anxiety. It seems very probable that one of the two murderers will die of heart failure or something of the sort and the movie executes all of these emotions perfectly. 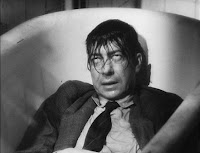 The movie becomes more and more mysterious when the body never shows up. It is truely creepy when the suit that they killed him in shows up at the school. Children claim to have seen him and even the pool is eventually drained and the body is still missing in action.

Well if you have seen as many horror movies as I have, you would know that this movie has probably been ripped off more then any other in history. Countless films have used the same plot for many different genres. Ghost flicks, sexploitation movies, gore films and many many more. Of course any movie that has been copied so many times deserves credit where it is due, the only problem is that film fanatics are more likely to watch the many remakes and ripoffs before seeing the original and it of course suffers from this.

Out of all the films to steal Diabolique's plot line I suppose my favorite is probably The Night Evelyn Came Out Of The Grave. It is the tale of two women who commit the perfect crime but then the corpse seems to come back to haunt them. In the case of Diabolique the murder plot was even more elaborate then it appeared to be. The mistress and the abusive husband were in it together from the begining. The mistress only pretended to drown the man and when they dump the body in the pool, he is still alive. Together the mistress and the walking corpse terrorize the abused wife in hopes to scare her to death so that they can be together and share her wealth. It all comes together with twists and turns and makes for a genius story. It just amazes me how many times it was ripped off but then again I suppose if you make a masterpiece like Diabolique it is bound to be copied.

See where it all started and don't be like me." Don't be diabolical yourself and tell your friends the ending of this movie."

Email ThisBlogThis!Share to TwitterShare to FacebookShare to Pinterest
Labels: Devils (The), Diabolique, Mystery