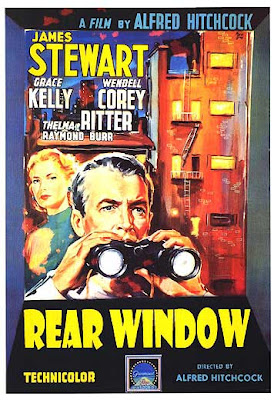 Ever sit home with nothing better to do then stare out the window? Well when ever I feel this way I like to sit home and watch James Stewart stare out his window in what is probably my favorite Alfred Hitchcock movie.

James Stewart (Vertigo, Rope) plays a magazine photographer who broke his leg on the job. Now he sits home in his cast and watches his neighbors fight, make love and bicker from his Rear Window. The things he sees from his apartment is probably better then anything that is playing in the movie theater unless of course if the newest Hitchcock film is out. Things get really crazy when Mr. Stewart starts piecing together a murder from his very own apartment. The beautiful Grace Kelly is Jimmy Stewart's best girl and it is not long before she is pulled into the mystery. "We must be two of the most horrible ghouls I have ever seen".

This movie really has a little bit of everything in it. Its got the romantic stuff between our two stars, suspense, drama, an excellent story, great acting, great camera work, mystery, bikini clad blond babes and of course it also dishes out a fair amount of the expected Alfred Hitchcock dark comedy. I personally relate this one best to Rope. Not so much in the plot department but more so how it was executed. Hitchcock has a way of taking a very simple premise and making it the most interesting thing you will ever see. Rope takes place almost entirely in one room and in that one room there is a world of interest. The Rear Window is very similar although there are many more exterior shots in this one. Still the idea is simple. A man looks out a window. A man sees something. Then the man reacts. This is basically done over and over again for 112 minutes but every single second of it is brilliant not to mention very interesting.

The Rear Window is one of those movies that never gets old. Just as James Stewart can never get enough of watching his neighbors I can never get bored of the movie. I first saw this one as a young kid with my parents and it blew my mind. All these years later I was taken back to that first experience when I was recently lucky enough to catch this thing in the theater. Seeing it on the big screen was everything I expected it would be. The detail, the cinematography, the Technicolor. It was all there. The Rear Window is a must see for anybody who digs Psycho or The Birds. It is one of the many faces of Hitchcock and in my opinion it is one of the best.