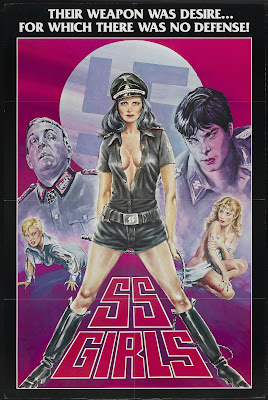 What we have here is the second film in the Italian schlock director Bruno Mattei's filmography. The same year he would release a far superior Nazisploitation flick entitles Women's Camp 119 but that doesn't mean that this one isn't any good... Just the fact that Mettei's name is on it is usually an indication that the movie isn't going to be great but where they lack in production value they make up for it in sheer bad taste.

SS Girls also known as Private House Of The SS is no exception to the rule. It is incredibly sleazy and as tasteless as they come. Bruno Mettei is clearly ripping of Salon Kitty and holds back on the artsy-fartsy stuff. Instead he gives us a mean spirited genre flick about a Nazi commander who gathers "Ten of the most beautiful whores in Germany" and turns them into proper love slaves of the Third Reich. They go through a ridiculous training that is acted out in what has to be one of the weirdest montage scenes in cinema history. They practice their sex, sword play, more sex, aerobics, and even more sex. Of course they are whipped and beaten here and there and in the end of the montage they graduate to proper prostitutes. Then the story gets very choppy and jumpy and this might be due to the fact that I own a cut down 82 minute version and the full uncut version is 95 min. Apparently my print has all the sex and violence intact but I suppose it is they plot that took the huge beating in this case. Hey that's why we call them Movies From Mars, right?

Anyway, we soon end up in a brothel which is run by a psychopathic general who is obsessed with finding traitors and of course executing them. The general eventually goes power mad and views himself as the next fuhrer. Hitler himself is killed off screen and WWII comes to a end which means only one thing... A Nazi suicide party. We are treated to watching one Nazi kill themselves after another and it makes for some very high entertainment. Most of them shoot themselves in the head but one stabs himself in the guts and another shoots himself in the stomach.

Check it out for a totally awesome Nazisploitation flick from Bruno Mettei and nonsensical Nazi mayhem. 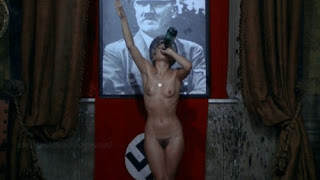