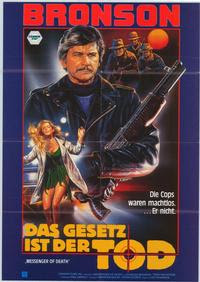 Here we are getting near the end of Charles Bronson's career. With the exception of Kinjite and Death Wish 5, from this film on Bronson was pretty much reduced to doing made for television movies and with that said Messenger Of Death really is not all that bad. 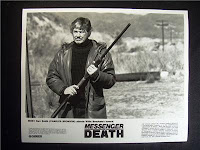 Of course M.O.D. doesn't compete with the mean spirited 70's stuff like Death Wish but it still manages to tell a decent story and is much better then some of Bronson's other movies from this time such as the wretched Assassination and in my personal opinion this is due to the films director who has some great credits to his name such as the early 80's slasher Happy Birthday To Me and one of my all time favorite Bronson flicks Ten To Midnight. Don't get me wrong, Messenger Of Death is far from being flawless. The acting is a bit horrendous and despite its {R} rating it is a bit on the soft side. One wouldn't guess it due to the harsh subject matter which deals with psychopathic religious fanatics and child murderers.

In the films opening an entire Mormon family is brutally murdered. While the man of the house is away, his three wives and six children are shot to shit by a madman with a shotgun. From here on we watch Bronson suffers from the mindless religious ranting of Mormon madmen and he gets caught in the middle of their gun fire. We also have some rich bastards who are trying to kill Bronson.

This movie is just like real life. Religion, police and rich scum-bags are the bad guys and Charlie Bronson is the one who has to wipe them out. 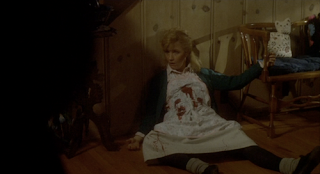 Email ThisBlogThis!Share to TwitterShare to FacebookShare to Pinterest
Labels: Messenger Of Death