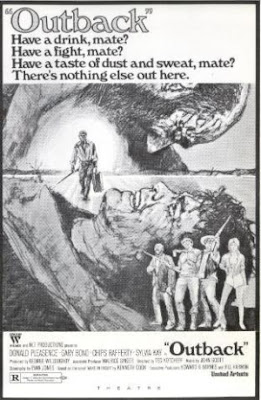 Ever get the feeling that you are trapped in your own personal hell? Like the rest of the world are living and your dead end town is going to be the death of you? Wake In Fright also known as Outback is exactly that. It deals with a discontent school teacher who leaves his life behind. The school, the kids, and the hell-hole he calls home. 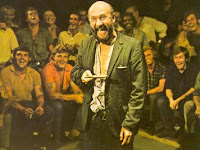 On his way to the big city he stops in a small town called The Yabba with the intentions of staying over night before getting back on the road for the big city. Well lets just say his plans fall through and there just might not be any way out of this town alive. The townsfolk insure the school teacher that The Yabba is the greatest place on earth. Perhaps one mans paradise is another mans hell. Personally The Yabba seems like a place that I would want to call home. It consists of insane alcoholics whom really have no ambition in life rather then having a drink, having a fight and just living like there is no tomorrow. From the time the teacher arrives in The Yabba till the end credits everything is one big nihilistic drunken blur. Is this a nightmare or is this reality. Its just The Yabba... The greatest place on earth.

Donald Pleasance plays a former doctor who left his profession in the big city for a life of drunken insanity in The Yabba. This is possibly Donald Pleasance's greatest role. His acting style is so intense in this movie it takes stamina to just sit and watch him. Pleasance found a free life in The Yabba, devoid of all care. He lives for free, drinks for free, fucks for free and finds pleasure in standing on his head (literally) and drinking. He is also good for a fight here and there and he also takes the audience on what has to be the most insane hunting trip in cinematic history. Pleasance and a group of friends take to the barren lands of The Yabba and kill kangaroos for sport.

The Kangaroo massacre is disturbing and maddening at the same time. The surreal images of these men plowing through the upright animals with their car and unloading shotgun shells into their bodies is intense on its own but a real Yabba-man will fight these things with his bare hands. They slit the Kangaroo's throats with knives, they punch, kick and strangle the animals and these marsupials are as big as 14 feet tall. It is completely twisted set piece that has to be seen to be believed. However Wake In Fright is not just here to shock you. There is a sort of philosophical moral tale to be told, which I will not give away.

This Australian flick was thought to have been long lost. With no vhs or dvd release and is currently circulating through the bigger cities. I was fortunate enough to catch a screening of this thing in New York City and the audience seemed to have the same reaction that I did. Now I await the dvd release of this 70's classic and only hope the company that puts it out is worthy of the title. I highly recommend going out to your nearest arthouse theater and seeing this thing for yourself. Its crazy! 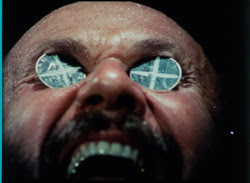