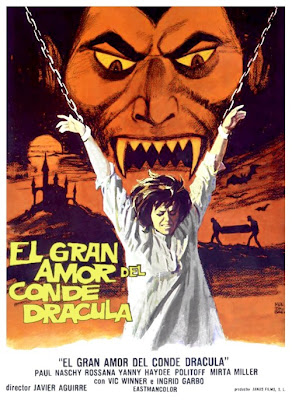 Its really easy to become a fan of the great barrel-chest, Paul Naschy but its not always so easy to understand why. Especially while sitting through the really bad ones like Count Dracula's Great Love.

This one tries really hard to take the immortal tale of Dracula in a different direction but when it is all said and done it is really pretty stupid. Two men and four women (I like those odds) have a bad accident while traveling and are left stranded in the middle of nowhere. They take shelter in an old abandoned sanitarium where Paul Naschy lives. Pretty cheery huh? Little do they know, Paul Naschy is a vampire and its not long before they will become blood drinking vampires themselves. Then we have a love story thrown into the mix. Hence the dumb title of Count Dracula's Great Love.

This very standard vampire flick has its ups and its downs. Unfortunately there are more downs then ups and its not a very good movie at all but that is besides the point. Lets start off on a positive note. Some of the more entertaining elements consist of scenes of sex and violence but that goes without saying. The film opens up with a bang and shows an axe which comes crashing down onto a mans achy-breaky skull. This scene comes complete with gore and then is played on a loop over and over again during the opening credits. I thought this was all pretty brilliant and figured that this movie was going to be a hoot all the way through but somehow they still managed to fuck it all up. Some of the other glorious moments of violence show chained women being whipped and tortured by Naschy and his band of female vampires. We have the expected steak through the heart stuff, lots of bare breasted vampire sluts, vampire melt-downs and a ridiculous vampire suicide scene.

Now for the bad stuff. Well first off the Elvira's Movie Macabre print that I saw is very dark and its not easy to see everything that is going on. Even worse then the lighting is the audio levels. It is so hard to hear these people speaking but then on the other hand it is not as if there is any kind of a real plot to follow so I suppose it doesn't matter. It also sucks that Paul Naschy doesn't take his shirt off as much as expected. I think he only bares his barrel-chest once in a love scene. Perhaps the worst thing about Count Dracula's Great Love is how slow paced it is. It is a real sleeper and I found myself forcing my eyes open more then once. Long reels of film go by where nothing seems to be happening until we get the next nude scene or if we are lucky a bit of blood but goddamn does it seem like ages are going by between each high note.

One thing that I thought was really strange about this movie was how the girls seem very attractive one minute and then in the next scene they are rather hideous. I am not sure if this was due to the makeup department or if there was just some sort of shape shifting magic going on here but I swear these babes are hot one moment and butt-ass ugly the next. So for this reason I am not even sure if all the Euro-Trash nude stuff is even a possitve thing.

I understand that Naschy fans are going to watch for Naschy sake but all others might want to skip this one. Its boring, slow and virtually plotless up until the end of the movie and they few moments of depravity is not enough to save Count Dracula's Great Love from being a great bore. 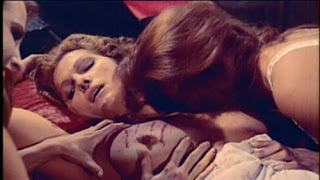