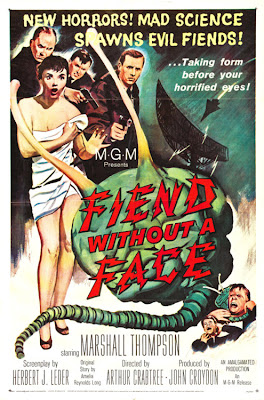 Fiend Without A Face is one of those movies that starts off a little slow with invisible monsters roaming about the country side and killing off the townsfolk. We all know and love the 1933 classic The Invisible Man but how much fun can a 50's monster flick be when you can't see the monster? Fear not my demented minions, before long these things take their physical form and they are amongst the coolest looking monsters of all time.

While the monsters are still invisible they seem to be almost vampiric. They wrap themselves around the victims neck and put two puncture marks in the back of the neck but a military autopsy shows that these things are actually sucking the brain and complete spinal column from these holes. When the monsters take their visible form they are in fact nothing more then a brain and a spinal chord and guess what. These things can fly. Since they are nothing more then a flying brain with a spine and antennas these little killers are actually highly intelligent. They even use weapons and in one of the best scenes one of these killer brains actually picks up a hammer.

These fiends were thought up by a mad scientist who used nuclear power to help separate a single thought from a human being. Once free from the human mind, the thought becomes more and more powerful with the help of the nuclear power plant which is right in the back yard. Its not long before the human race is in danger from the deadly grips of The Fiend's without A Face.

Eventually the military steps in and goes to war with the flying brains. We get plenty of really cool 50's stop animation complete with exploding brains and lots of black and white gore. While the soldiers are having fun playing target practice with these things the civilians board up the house in true Night Of The Living Dead fashion and arm themselves with pitchforks and axes. In one of the most memorable scenes an axe is buried into the twitching brain and blood spurts out across the floor.

Fiend Without A Face is pure 50's monster-rama fun. It's campy, its bloody and its just plain crazy. This is a must see for anyone who digs these old monster flicks and luckily for us Criterion has added The Fiend Without A Face to their collection. It looks better then ever and is well worth the purchase for the average brainless fiend. 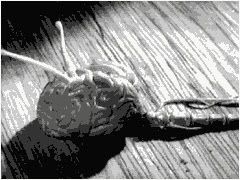 Email ThisBlogThis!Share to TwitterShare to FacebookShare to Pinterest
Labels: Fiend Without A Face, Monster Movies