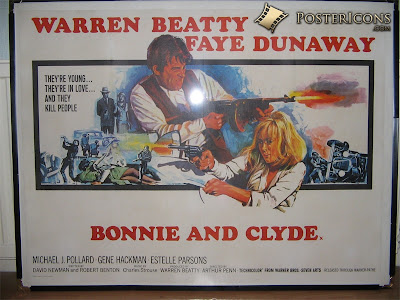 I will never forget the first time I saw this movie. I watched it with my father in my pre-teen years and I became some what obsessed with the two bank robbers. I think it scared my father a bit when he saw how much I loved these two iconic villains. I would rent the movie over and over again from the library and knew every line and every scene. All these years latter I still hold this film very close to my heart.

Looking back on it now it is no wonder this movie pulled me in the way it did. Clyde (Warren Beatty) is a bad-ass tough guy who doesn't follow any of the rules. He has a hot girl, hes good with a gun and nobody can catch him. Faye Dunnaway plays Bonnie and as a young kid I couldn't help but agree with Clyde that "She's a knock-out". In the opening scene we have the privilege of watching her walk around her room in the nude. It is the ultimate tease for the average 12 year old boy. The camera hits every angle to show off all of her finer points without actually showing any full frontal nudity. I can relate it best to Brigitte Bardot films like And God Created Woman. To say the least this scene was the ultimate tease for me when I was a kid and it is still very sexy today.

Together Bonnie And Clyde ride across country robbing banks, stealing cars and killing cops. three more baddies join them along the way and it becomes evident that Bonnie And Clyde will never make it out of this alive. The two lovers make an unspoken pact to stick together till the bloody end and leave a legacy behind them that the world could never forget. Sure the story is a bit romanticized but it just makes for a more memorable cinematic experience. I was actually lucky enough to a catch a screening of this thing in a art-house theater. I was surrounded by old-timers and they served wine and cheese. Myself and my mongoloid friends excluded were the only ones amongst the crowd that were not senior citizens. Of course we indulged in the wine but I couldn't help but think to myself what a shame it is that the youth of today are probably unaware of this classic film at large.

The 60's film is as timeless as the two criminal figures themselves. It has something in it for everybody. Its a perfect movie to watch with your best girl because of the romantic subplot that runs through out the film but it is also a great movie to watch with your friends. We get all the car stealing, bank robbing and violent shoot-outs that we deserve. It even has a bit of comedy to it. One scene in particular shows Bonnie And Clyde stealing Gene Wilder's car. "I'm gonna tear those punks apart". It is truly a funny moment and offers up some really funny quotes but don't laugh for to long because as we all know Bonnie And Clyde ends in great tragedy. The Nihilistic ending serves as a sample of things to come in the gritty 70's. For me Bonnie And Clyde is almost a blueprint for a style of film making that is to come from cinemas greatest decade. The sick and twisted, mean spirited 70's.

If you have not yet seen this movie you better ask your dad if you can borrow his library card. Its a must see. 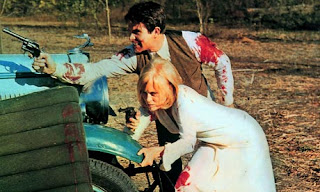