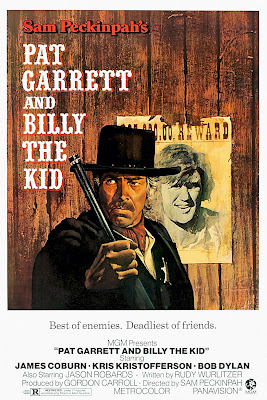 All over the Internet I have read reviews from moronic ass-hats who like to bad mouth this movie. Apparently there is a heavily cut version of this movie which runs around 90 minutes and it just doesn't make any sense. The full 122 minute version on the other hand is brilliant and is one of the coolest westerns ever made.

Directed by the genius Sam (The Wild Bunch) Peckinpah (Straw Dogs, Bring Me The Head Of Alfredo Garcia), Pat Garrett & Billy The Kid is a stylish film on the classic tale of Billy The Kid and his old pal Pat Garrett. For those of you who came from under a rock and are not familiar with the story, Billy The Kid and Pat Garrett were two outlaws in the old west. The ran together and committed all kinds of terrible crimes together. They eventually parted ways and became sworn enemies until Pat Garrett finally put a bullet into Billy The Kid. A legend was killed and another was born. Hence the basis for Sam Peckinpah's film. Not only does the movie follow two of America's most infamous icons but it also portrays the dieing west in a way that I have never seen in any other film.

Even though Billy The Kid is a ruthless killer, the film portrays him as a man of principle who represents freedom. Billy refuses to except the new way. "You want to put a fence around my country?" He will fight the law and the establishment and is willing to be called an outlaw in order to keep his idea of freedom. Pat Garrett on the other hand has sold out to the man and was picked as the new sheriff in town. It just so happens that his first big job is to catch or kill Billy The Kid but if anybody knows Billy the way that Garrett knows Billy they would know that you can't take the kid alive. From here on it is a game of cat and mouse. Many get shot and killed during the game but the final showdown is between the two men who's name ate up the title.

Although the runtime may be a bit long on this one it never seems to get dull or boring. Metaphorically and literally Pat Garrett & Billy The Kid has much to gawk at. Sam Peckinpah also brings back some of that religious commentary that we all know and love so much from The Wild Bunch and in many senses also touches on that nihilistic tone of anarchy that made the previous film so famous. In my favorite scene Billy The Kid shoots a crazed Christian full of holes with a shotgun that was "Loaded with $1.60 in dimes". After he fills the religious psycho with American currency he tells the limp victim to keep the change. It is moments like this that make Sam Peckinpah a god amongst other directors. There is also some naked women on display, a orgy, lots of bloody shoot-em-up scenes, plenty of whisky drinking rough-necks, a very unique cast which includes Bob Dylan as Alias and some amazing quotes "You want a woman? I got one named Bertha. 'got a ass on her like a forty dollar cow 'n' a tit - I'd like to see that thing filled full o' tequila."

This one is more for lovers of spaghetti westerns. Its a bit to stylish and violent for the old timers who still dig John Wayne. 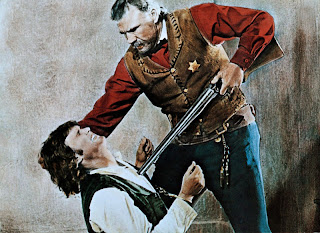 Email ThisBlogThis!Share to TwitterShare to FacebookShare to Pinterest
Labels: Pat Garrett And Billy The Kid, Westerns.