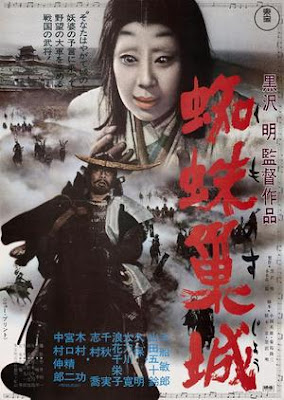 Personally not being an expert or even very familiar with Akira Kurosawa (Seven Samurai, Yojimbo) and his body of work, it is impossible for me to compare Throne Of Blood to the legendary directors other films. This however being the first Kurosawa film I have ever seen and the only one in my collection there is a soft spot in my heart for this eerie tale of ghosts, power, betrayal and death.

Throne Of Blood also known as The Castle Of Spiders Web is a adaption of Shakespeare Macbeth that takes place in medieval Japan.

Two brave and respected warriors encounter a ghost in the woods who will tell their future. The ghost although seemingly evil by its appearance seems to only bring good fortune. The soldiers are informed that they will become very important and powerful men. They will be emperors and rulers. Sure enough the fortune comes true for the two men almost immediately. However the men almost seem to be haunted by the memory of the spirit in the woods for years to come and it seems as if they almost expect bad fortune to come their way. 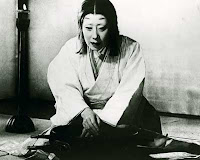 Throne Of Blood soon transforms into a tale of paranoia, madness and betrayal. One of them is manipulated by his power hungry wife. He becomes more and more paranoid until he sinks to the level of killing his friends and superiors. The other is betrayed by his son which changes the course of the fortune told by the ghost in the woods.

The film comes to an end with a tragic battle and our main characters being assassinated by their own men. One of them is showered in arrows in a unforgettable scene. I couldn't help but wonder if Brian De Palma was influenced by this scene for his climax of Scare Face. 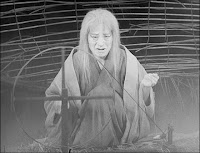 The creepy imagery is really what makes Throne Of Blood so appealing. Horror fans will appreciate the cinematography and makeup used for the spirits and ghosts. We also have an awesome scene where the trees in the woods come to life and rise to attack and kill the emperor. It has to be seen to be believed. Its amazing to think that in America in 1957 we were making movies like Invasion Of The Saucer Men or I Was A Teenage Frankenstein and at the same time over in Japan Akira Kurosawa would come out with cinematic art like Throne Of Blood.

Check it out for creepy ghosts, arrows through the neck (complete with black & white blood), sword violence, spear violence, an insane drunk "I am terribly drunk" and one of the creepiest women to ever appear on screen. 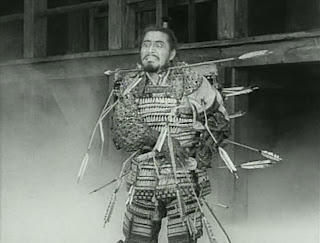