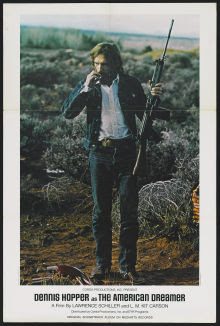 Charles Manson fanatics will be pleased with this rare title. Just when you thought you have seen every piece of footage with Charile Manson in it, something new comes along. Like The American Dreamer. Oh wait... That's not Charles Manson. Nope, it Dennis Hopper.

After the success of Hopper's directorial debut Easy Rider, he went on to direct an odd little gem in cinema of the weird. Its an artsy-fartsy tale of a film crew who are mimicked by poor villagers. The only difference is the villagers use of violence is for real. The Last Movie is definitely a movie from mars and might even cause brain damage to those who are not used to that form of cinema.

While Hopper was  editing The Last Movie a documentary crew was following the new director around with a camera and filming Mr. Hopper's crazy life. Apparently Dennis Hopper thought he was Charles Manson for a little while there. While living in the desert with a bunch of hippies the camera crew films Hopper's insane philosophy on life. It's amazing to see how much the man is imitating Manson. I would almost love to sit down with Dennis Hopper (r.i.p.) and watch this film, just to see if he would be embarrassed of himself for his blatant fascination and impersonation of Manson. Hopper even goes on to explain how he went to visit Charlie in jail and shares their conversation with us "If I'm your garbage, then you made me your garbage. I am what you made me."

Check out The American Dreamer for some Charlie Manson style philosophy, naked hippies, lots of grass toking and Hopper blasting off his guns and just being the madman that he is. Dennis Hopper is one of my all time favorite actors and anybody who loves the man almost half as much as I do needs to see this oddity. 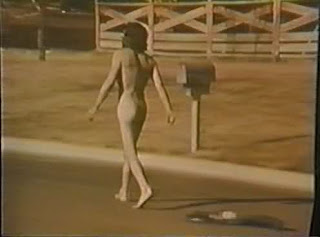