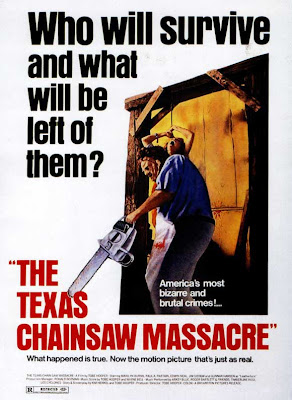 Recently I had the privilege of catching the greatest horror film of all time on the big screen during twelve hour horror festival. Texas Chainsaw Massacre being my all time favorite film in the genre I was pretty psyched. As if this experience wasn't going to be memorable enough for me, the very old and very rare print burned on screen right before my eyes. Luckily for the print holder the movie only burned during the opening narration scene. "The film you are about to see is an account of tragedy that befell a group of five youths, In particular Sally Hardesty and her invalid brother Franklin. It is all the more tragic in that they were very young but if they had lived very, very long lives they could not have expected nor would they wish to see as much of the mad and macabre as they were to see that day..." Then the thing goes up in flames right before the audience. It couldn't have been planned any better. 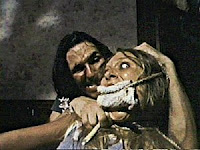 However once they got the film back up and running it was as if I were seeing it again for the first time. The countless vhs and dvd viewings I have given The Texas Chainsaw Massacre goes out the window the second it is seen the way it was intended to be. The blown up 16mm holds nothing back from the audience. Even through the wear and tear and the grit & grain, I was seeing things that have never stood out in the past for me. For instance the rotting corpse in the beginning of the film in the cemetery has liquid decay dripping from the front teeth. There is hair to be seen in the mess of bones and skeletons that are scattered throughout the house. You even get to see deeper into Franklin's boxer shorts when he falls from his wheelchair while urinating in his favorite coffee can. 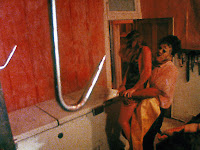 I make jokes now but I wasn't laughing or making jokes in the theater. The Texas Chainsaw Massacre is the most relentless and terrifying film ever created. Its a heart pounding ride that just doesn't let up. From the demented script, to the morbid scenery and the disturbing characters. The sound of the film alone is enough to give a horror fanatic a nervous breakdown.

It must have been a sight to see in 1974 when this thing was unleashed on theater goers. I wonder how many women were sick in the passenger seats at drive-ins. I wonder how many men jumped and latched on to their best girl and didn't even feel the need to be embarrassed. This is truly a scary film and the audience can go a little insane with our main female character.

If this thing ever plays in a town near you, be sure to be there. It is an experience that can't be forgotten. 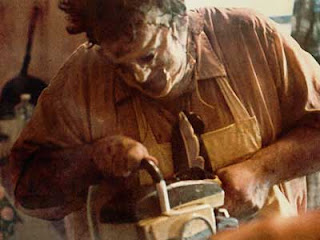