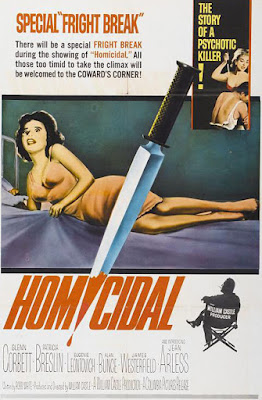 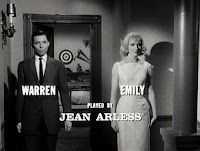 William Castle cashes in on the success of Hitchcock's Psycho which came out one year prior. It doesn't take a genius to figure out that Hitchcock and Castle are in two very different ranking positions so Castle does what he does best and puts on one hell of a show. Cards were handed out with the purchase of ticket that allows the movie-goer to get a full refund at the cowards corner providing they leave the theater before the films climax during the "fright break". The "fright break" interrupts the film right before the final reel with a clock that counts down 60 seconds. Naturally nobody would leave before the end of the movie and be seen in the cowards corner by their friends so Castle makes out yet again with another brilliant gimmick.

Aside from the fright break Homicidal is pretty graphic for its time and definitely surpasses Psycho as far as the blood goes. In one scene a man is stabbed repeatedly in the gut with a big kitchen knife, leaving a bloody mess for all us gore hounds to stare at. We also get a decapitation which is not much by today's standards but in 1961 definitely turned a few stomachs.

Homicidal is a bit on the slow side but is all worth the wait in the end. Castle doesn't disappoint this time around with a twist ending that was totally original for its time. I won't give the climactic twist away because William Castle warned during promotion "Do not give the ending away to Homicidal. If you do your friends will kill you and if they don't I will!" 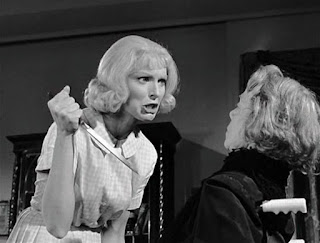