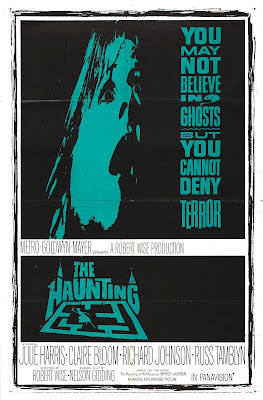 Robert Wise (The Day The Earth Stood Still, West Side Story) directs what is probably one of the best supernatural movies of all time. Or at least as far as a serious ghost movie goes. William Castle's schlocky classics will always hold a place in the hearts of us B-movie fans but unlike 13 Ghosts and House On Haunted Hill, The Haunting achieves its entertainment with mood and creepy imagery. 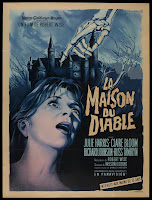 The audience never sees a ghost in The Haunting but the proper use of lighting and shadowy figures gives the film its strength. In other words The Haunting is not a B-movie. In fact it was somewhat of a big budget film or at least big budget as far as the horror genre goes. Robert Wise chose to shoot in black and white not due to the lack of money but rather he felt that it would enhance the film which he was very much correct about. The black and white film definitely adds mood to the creepy old house where as if it was shot on that sort of Alfred Hitchcock Vistavission or something it really would be baring to much to the audience and most likely harming the final product. Even though we never see a ghost, there is no doubt that Hill House is haunted. Loud sound effects and sudden change in camera movement is used rather the half-assed special effects.

We might not see any ghosts but we do get a suicide by hanging which is probably one of the best self hanging scenes in film history. Another women falls to her death down a very long set of spiral stairs, death by car crash, lesbians, and some Russ Tamblyn-fu.

The Haunting was taken from a novel and supposedly follows pretty close to the events withing the book. It tells of a haunted mansion called Hill House and a scientist who along with three assistants is using Hill House as a medium to either prove or disprove that supernatural powers exist. Well the scientist may not prove anything to the world but he certainly proves to his assistants along with us as the viewers that ghosts are very real. Tamblyn's character is the great disbeliever in The Haunting. He mocks everybody for their faith in ghosts but before the films ending Tamblyn's character is more then believing.

The Haunting would be ripped off dozens of times with films like The Legend Of Hell House and even Pet Sematary before it would be remade and completely bastardized in 1999. I unfortunately was brave enough to see the theatrical release of The Haunting and remember it as being one of the worst horror films I have ever seen. Stick with the original and don't ever put yourself through the tortures of the 99 remake. 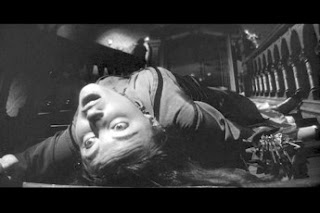 Email ThisBlogThis!Share to TwitterShare to FacebookShare to Pinterest
Labels: Haunting (The), Hauntings And Ghosts