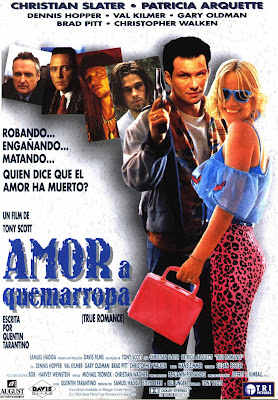 Back when Quentin Tarantino was still a great writer he thought up one of the best love stories of all time. If I had to relate it to any one other film I suppose it plays a bit like David Lynch's Wild At Heart in the sense that they are both 90's films and definitely not your normal sappy love story. 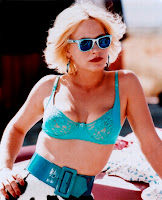 True Romance almost seems as if it was Tarantino's wet dream. The story follows Clarence Worley, (Christian Slater) a Elvis obsessed dork who works in a comic book store and watches way to many exploitation movies who falls in love with a beautiful blond bimbo named Alabama (Patricia Arquette). They make the perfect couple. They meet in a grindhouse theater at a Street Fighter (Sonny Chiba) triple feature. They both dress in swanky, rockabilly clothing and they love greasy food but the honeymoon can't last forever. Its not long before the couple is fighting off pimps, mobsters, drug dealers and the police.

True Romance is pretty violent and has a decent amount of bloodletting. Its also chock full of bad language so the moms might not really dig this one so much. It's definitely a movie that is more for dad and Patricia Arquette isn't so bad on the eyes either as she walks around in bra's and tight leopard print spandex pants.

Dennis Hopper shows up as Clarence's father and has the most memorable scene in the movie with Christopher Walken. Tarantino soaks this segment of the script with racism and violence. Hopper takes Walken through a history lesson and informs him that his Sicilian genetics are tainted with black blood in a brilliantly written scene. Walken reacts by shooting Hopper in the face and spitting on his corpse.

Gary Oldman (Sid And Nancy), boring Brad Pitt, Val Kilmer, Chris Penn and fucking cousin Balki from Perfect Strangers show up all in memorable roles. Gary Oldman plays a white pimp who thinks he's black and goes on long rants about The Mack. Oldman blows a dude away with a shotgun because he doesn't "eat pussy" and throws a serious ass beating on Clarence "He must have thought it was white boy day". Pretty boy Brad Pitt plays a loser pot-head who doesn't really offer anything to the movie except maybe for other fellow pot-heads who might get a cheap chuckle out of his stupidity. Chris Penn plays a bad-ass cop who gets caught up in some serious gun-violence and Balki vomits on himself and gets covered in cocaine while getting road-head.

We also have bullet wounds to the eye, a mobster gets his face set on fire and gets hit over the achy-breaky skull with a toilet bowl cover before having his chest blown apart from multiple shotgun blasts. We get some Sonny Chiba kung fu, dead cops, lots of blood, a great soundtrack and the whole time you can cuddle up next to your best girl. After all this is a love story. Its called True Romance... How sweet! 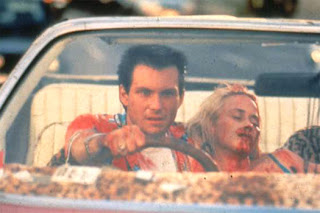