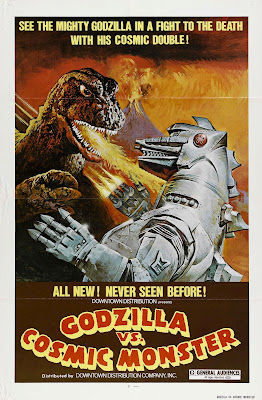 Oh god, I don't even know where to start. These Godzilla movies are off the fucking wall and the most absurd seem to be the ones from the 70's. 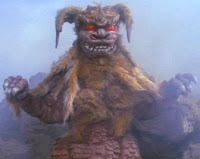 Okay so Godzilla comes to Japan to fuck shit up but is intercepted by Mechagodzilla which is a sort of robotic version of Godzilla which was created by aliens in cheesy shiny suits. Godzilla gets his ass kicked by Mechagodzilla a bunch and every time the robot suffers damage the aliens pull it back to their spaceship and repair it and make it more efficient for the next fight.

Meanwhile Godzilla fights other monsters that are only found in parts of the world like Japan. Godzilla stomps one monster into the ground that looks like a mix between a hedgehog and the monsters from The Killer Shrews. We also have a bunch of silly Japanese folk praying to some monster called King Cesar who is woken up from some deep sleep by some long drawn out singing and dancing from what is supposed to be the sex appeal bikini clad Asian lady. Cesar joins forces with Godzilla and the two monsters tag-team against Mechagodizza but King Cesar gets his ass handed to him pretty quick. What can you expect, Mechagodizlla shoots lazers from his eyes, fire from his mouth and rockets from his fingertips and toes. Geeezzz.

As if this isn't enough the aliens that created Mechagodizlla are really a bunch of apes disguised as humans. For some reason when they get shot in the face their human flesh fades away with some really bad special effects and their true, hairy, Planet Of The Apes ripoff identity becomes known. We also have two silly secret agents who run around and save peoples lives. This is pretty silly considering that there are monsters that are threatening all of the world (or at least Japan) again. Never the less these guys add some added fun with car explosions and fist fights with ape-people. The best lines and memorable quotes however come from a scientist who has a strange fascination with magnets and pipes. "Its a powerful pipe".

I was lucky enough to catch this thing in the theater with a bunch of drunken, chuckling folk. Even if some pansy asked us to "keep it down" as if Godzilla VS. Mechagodzilla were some deep, philosophical, expression with important and intelligent dialogue, it was still a great experience. Lovers of bad monster movies should enjoy this one. Watch for the scene where Godzilla stomps his enemies head into the ground. It comes complete with red gore! Oh and for those concerened, Godzilla wins! 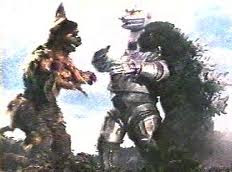